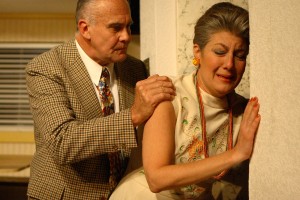 One of those productions that you wish had just gone all the way and presented itself as a parody. As is, “Home Front” gives a hackneyed story of the costs of war, centering on an utterly unlikable young soldier with PTSD struggling to live in his parents’ suburban home after returning from Vietnam in 1973. Rather than discovering the complexities of his trouble adjusting, we only see young Jeremy giving his family the silent treatment snarling at them for their vapidity, throwing temper tantrums, and eventually (and painfully predictably) having a psychotic breakdown that lasts far too long and involves a child’s bedtime prayer and lots of gun waving. When Jeremy lectures his caricature family members (anxious martyr housewife mother, gruff domineering father, and bratty but empathetic psychology-major sister) about the travesty of Vietnam, the cliches, cheap pathos and dated message of his rants are what finally push the show to the level of farce. Hysterics bury the occasionally fresh lines (“War does not make you rude to your parents”), but the central conflict and the stories about killing during war are too stereotypical to feel at all substantial. Actors do their best—Joan Merlo has a particularly valiant effort at making the mother sympathetic—but it’s a thankless battle. (Monica Westin)