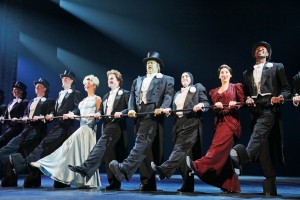 If there is one advantage to a show with such advance high expectations as Mel Brooks’ musicalization of his 1974 film “Young Frankenstein” bombing in New York as badly it did, it is that Chicago gets it sooner than the shows that succeed on the Great White Way so that we have a chance to decide for ourselves. In this case, it becomes an endless and fascinating game of “What went wrong?” as you experience an excessive and heartless show that is to the Broadway musical what George Lucas’ “Howard the Duck” is to the movies.

Exactly where and how did Brooks lose his way on this one?  For starters, he jettisoned John Morris’ memorable music from the film, including his haunting violin serenade that always motivated the monster. (Morris, by the way, is also the composer of the original songs in Brooks’ “The Producers,” including “Springtime for Hitler,” though Brooks wrote the lyrics and after filling out the rest of the score for the play and winning a Tony Award for “Best Score,” Brooks apparently now thinks he alone should be the one writing scores for his shows.)  Yes, the concept of the violin serenade remained, but Brooks substituted his own watered-down melody and it is so innocuous that when it appears in the climax of the show and the monster (Shuler Hensley) responds to it, the audience is left wondering what might have actually distracted him.

But wait, there’s more. Morris’ original score was a satire of the music from the original Universal Frankenstein films, which meant that it was full of suspense, dissonance and, most importantly, was both funny and scary at the same time. Brooks jettisoned that concept entirely and decided to write Tin Pan Alley-type songs for the characters in the show that, while occasionally funny, are never, ever even remotely scary.  As you listen to the opening of the show where a Teutonic peasant chorus sings its way during a funeral, you’ll be hard-pressed to tell the difference between this and the opening of “Spamalot”; apparently musicals written by comedians go for the same bland generic sound.

The idea for the film “Young Frankenstein” belongs to Gene Wilder, who wrote the basic outline for himself to star as the doctor but who enlisted Brooks to fill out gags and to direct. Brooks took over and Wilder had little choice but to give him a co-credit as script writer. Brooks had fought Wilder on the idea of the monster doing a song-and-dance routine with the doctor—for many of us, the funniest scene in the movie as the poor monster does his best to mumble through the chorus to Irving Berlin’s “Puttin’ On the Ritz.” Brooks wisely paid an extensive royalty to the Berlin estate to keep the number in the Broadway musical version and, not surprisingly, it is the best song and the best scene and is immensely enhanced by Susan Stroman’s clever choreography. It is a rare and entertaining moment such as this that makes you sigh and think what could have been.  (Dennis Polkow)