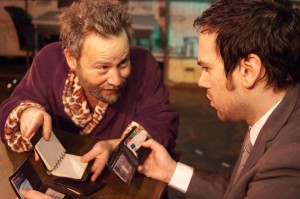 When London ad exec Charlie (Carlo Lorenzo Garcia) feels the walls closing in—his coke habit is spiraling and his dealer after him for money, he’s caught extorting money from a client, and most disturbingly he’s increasingly convinced nothing around him is real—he turns to a con-artist family friend (Kevin Stark, stealing the show as wiley Mike) who helps him take on a new identity in a post-Facebook world. Of course, since Charlie is running away from himself, there’s an inevitable grievous ending, but the show’s motor is independent of its somewhat predictable plot. Dialogue is extremely quick witted and droll—dare I say, very British—amongst a stellar ensemble that manages to portray a realistic, class-conscious strata of London. There are some incredible monologues about postmodern life, including an unforgettable rant about lost cell phones by a London transit worker. As the surreal, Kafkaesque story weaves between nightmare and gritty realism, director Richard Cotovsky keeps a constant tension between expressionism and naturalism. (Monica Westin)