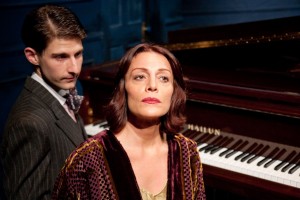 Isadora Duncan’s innovative approach to choreography set the dance world on its ear; she inspired such devotion that dancers took her name in tribute. She was an outsized figure who lived a manic, tragic life and died a victim of her own affectation.

Unfortunately, affectation is the only thing the audience gets to see in Timeline’s current bio-play of Duncan’s life. There is no dancing, no examples of the work that earned Duncan such affection and acclaim; just sex, drinking and the scrambling for cash that make the sex and drinking possible.

We see affecting memory of Duncan in her prime. Duncan’s translator, Miss Belzer (the reliably poignant Janet Ulrich Brooks) and accompanist  Alexandros Eliopolos (a fresh and funny Alejandro Cordoba) detail Duncan’s (Jennifer Engstrom) artistic victories, but the rest is dramatized excess. Director Nick Bowling does what he can with a script that doesn’t give us all we need. (Lisa Buscani)