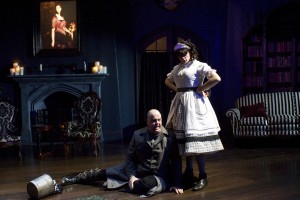 There are few plays that can boast a backstage drama to rival the one being seen out front. “The Mystery of Irma Vep, A Penny Dreadful” is one of those plays.

The late playwright-director-designer Charles Ludlam’s comedy, which opens at Court Theatre this weekend, is at once a Victorian-style send-up of the Gothic melodrama, a hyper-verbose mish-mash of recherché literary references and delicious double-entendres, and homage to the midnight horror flicks of yesterday.

At its heart, however, it is a simple show devised entirely around a simple concept, the quick-change.  And yet, as evidenced by the backstage brio and technical wizardry that makes it possible for two actors (Erik Hellman and Chris Sullivan) to take on nine roles and pull off dozens of split-second costume changes, there is nothing simple about it.

Director Sean Graney likens the challenge of coordinating the backstage dance between Hellman and Sullivan and the show’s five dressers to piecing a puzzle together or solving a Rubik’s Cube:  “It’s like Ludlam said ‘Fuck all of you, you’ll never be able to figure this out’ and I’m like, ‘Oh, okay, let’s do it!’”  Assistant Stage Manager Sara Gammage favors the sports analogy, appropriate for a show that demands nothing less than sheer athleticism from all involved (“It’s like designing a playbook, if you were playing basketball or football, and mapping out the Xs and Os and what needs to go where and when and in how much time.”)  And Production Stage Manager Ellen Hay, who oversees everything and is responsible for calling the show’s 300-plus light, sound and special-effects cues (an amount not typical for a non-musical) quips, “This is just another day in stage management…times a thousand.”

Spectators at “Irma Vep” will quickly gather this in performance, and wonder what’s transpiring in back to make possible what they’re seeing in front. It’s the reason a large chunk of audience questions at an early post-preview discussion center around designer Alison Siple’s costume construction, as well as why Sullivan will make a strange request—strange for a non-dance show—during “Irma”’s final rehearsal hall run-through in early November, “Can we do that again?  Just for the muscle memory.”

The rehearsal space is a low-ceilinged and slightly-claustrophobic affair, and yet it allows this observer the thrill of being privy to “Irma”’s onstage and backstage antics simultaneously.  Cast and crew have already spent at least a day and a half entirely on the choreography of the costume changes, and the quick-change “machine,” powered by dressers Susie Peyalo, Samantha Pudil, William Collins, Samantha C. Jones and Alexia Rutherford, is already becoming well-oiled:  Hellman and Sullivan learn to shed layers of clothing in less time than it takes some people to remove a sweater; the quintet practice moving as one organism with ten hands, a skill that will soon enable them to quickly traverse the intricate backstage area of the Court Theatre for complicated changes involving all five dressers; and costume difficulties are dealt with swiftly.  “In normal productions, under thirty seconds is a quick costume change,” says Hay, “and in this one we’re trying for ten or fewer. It’s intense.” Adds Hellman, “I’m of the second school of actors who warms up as I have my cup of coffee. And it’s not cutting it for this. My shoulders have been a mess.” Sullivan chimes in, “We started doing yoga in the mornings,” a comment that is probably true but even more hilarious when you consider its speaker is 6-feet-5-inches tall and built like a linebacker. In other words, you wouldn’t want to be in Sullivan’s way as he hurtles down a backstage runway like a 747 readying for takeoff.

And yet this is exactly what dresser Pudil faces ten days later during a Saturday evening preview when a bulky prop is accidentally blocking one of Sullivan’s tracks. In a burst of energy and four quick steps, culminating in a swift kick that would make the Chicago Fire soccer team proud, she clears the pathway allowing Sullivan to make his entrance on time. Other backstage feats of athleticism are just as impressive.  Hellman will burst backstage, pivot backwards on one foot and land the other into a pool of creamy white fabric—soon to resemble a dress—which Collins has strategically laid out for him.  Peyalo and Jones, if they haven’t already ripped a jacket off the actor or caught the props he’s flung into the dark, are handing him new body or facial accoutrements while Rutherford is securing a wig onto his head and Collins is already scooping up the new costume and fitting it snugly onto Hellman’s lithe frame. Collins slaps the actor on his back, a sign that all systems are go, and Hellman is back on stage within ten seconds. Gammage, the calm in the eye of the storm, jots down a note or two on her clipboard and moves to another part of the stage awaiting to supervise her crew’s next technical coup. This happens, in permutations, throughout the two-hour show, not that you’d know it out front, given Hellman and Sullivan’s ability to saunter onstage as if coming off a leisurely stroll. There are snafus, however, and not all of them related to wardrobe malfunctions.  “Standby crew for curtain out, standby Susie to give me a set, standby lights and sound 680 to 720” commands Hay on headset with the icy nerve of an air-traffic controller.  “Curtain is not coming down,” transmits a worried Pudil.  “Sill Up?” asks Hay, calmly.  Finally, Pudil says “Got it!” Hay:  “Confirm the curtain is down.” Once reconfirmed and within seconds, Hay sputters out a total of nine “Go” cues and the scene proceeds.  With all these marvelous moments backstage, it’s easy to forget that there’s an entirely different show that audiences are paying to see out front.

Later, between a matinee and evening performance, the show’s virtuoso wardrobe crew are relaxing together in the green room, having some beers, and sounding a lot like a NASCAR pit crew. “I was terrified coming into this because I had heard many horror stories about what can go wrong, but once you get into it there’s an adrenaline of competition,” says Jones. Collins et al compare injuries (“zipper calluses,” “Velcro burns”) like trophies of war, and everyone remarks on how “fast everything goes.” But there is no whining and nobody raises their voice. A good thing since Hay had earlier informed me, “We don’t yell here, and we don’t cry here. There’s no crying at Court Theatre.”