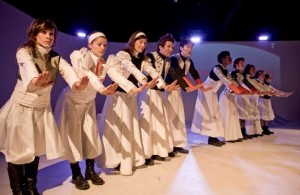 There are bad parts of this patronizing, indulgent production and then there are worse parts, but it’s a train wreck from start to finish. The show purports to be a study about gifts (spoiler: the ultimate gift is the gift of life!) and is structured as a “gift-consciousness” seminar, complete with a PowerPoint presentation and illustrative skits in which actors dressed as sci-fi pilgrims perform childish, reductive scenes about different ways we can give things to people. To the extent that there’s a plot, it consists of actors “rebelling” against their (cult?) leader directing the skits in order to open a box that supposedly contains the audience’s memories. This conflict somehow signifies the lesson that gifts can be “messy” and are more than just material objects. Yes, really. The concept of the show is almost too facile to be believed. But to add insult to injury, G.I.F.T. is pretentious to the nth degree. From the moment the audience enters the large darkened warehouse space, in which we’re asked to follow a pebble labyrinth while bombarded by incense and pat messages about the importance of giving; to the awkward “audience interactions” wherein actors force large, unidentifiable and ugly papier-mâché “gifts” at us; to the performance-art tropes it tries to engage (plastic wrap and repeated motions in futuristic face paint, anyone?), the show actually seems to be asking us to take it seriously. Which is one gift we just can’t give. (Monica Westin)

At Firehouse Square, 459 North Wolcott, collaboraction.org for tickets. Through November 29.