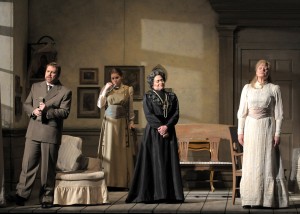 The operas of Leoš Janácek came rather late into the Lyric Opera canon, but the first opera from his so-called mature period, 1921’s “Káta Kabanová,” is making its first return visit since it was first heard here back in 1986. At that time, Lyric’s then-general director Ardis Krainik pushed the piece’s connections to Puccini’s “Madama Butterfly” in the hopes that Lyric’s conservative Italian-repertoire-centered audiences would accept the piece.  Twenty-three years later, “Katya,” as it is often referred to in English, is still a tough-enough sell for Lyric audiences that those loose connections are once again being brought out of moth balls.  Yes, it is true that Janácek loosely claimed such an inspiration, but aside from the virtually opposite music worlds that these two early twentieth-century operas occupy—Puccini looking back to a previous century, Janácek a composer of his time who sought to innovate and look ahead—the heroine of “Butterfly” remains faithful to her husband whereas “Katya” is the one who cheats on her husband. Despite the considerable sympathy that is built up for Janácek’s heroine, that remains a crucial dramatic difference.

That said, the current Lyric Opera revival—essentially, the 2004 Met production—is the best Lyric production of a Janácek work to date, by far. The trick to these works is putting the drama first, and particularly allowing the speech patterns of the Czech language to determine the dramatic and musical flow. In that regard, the real “star” of this production is German conductor Markus Stenz, making a stunning Lyric Opera debut and keeping tight reins on the Lyric Opera Orchestra, which has never sounded better.  Gone is all of the harshness that often characterizes performances of this piece (including the virtually frigid Glydenbourne performance ironically led by Lyric’s current music director Andrew Davis two decades ago that remains the only DVD version available), Stenz allowing the tranquility, luster and lushness of the score to take center stage.

Another crucial component is to have a Katya that really represents the pure soul that Janácek intended, which Finnish soprano Karita Mattila embodies and radiates on every level. She has to be enough of her own woman to stand up to her insufferable mother-in-law (Judith Forst) and be able to defend her husband (Jason Collins), who will not. But Katya craves freedom that she has never had and sings of her wish to be able to fly like a bird in a stunning aria in Act II that remains the emotional core of the opera and which Mattila soars to vocal heights with, literally.  When a family friend (Brandon Jovanovich) shows her the attention that she has never had, Katya gives in, though she quickly realizes her mistake and publicly admits to her sin before committing suicide. No, it’s not Puccini: it’s something better.  (Dennis Polkow)