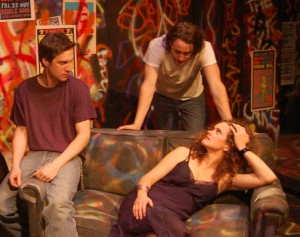 Full disclosure: I booked playwright Laura Eason’s band, Tart, back in the nineties for a gig. We had a good time. And that’s what’s missing from her account of a nineties rock band: the joy and fun that keeps musicians coming back. Eason’s chosen to dramatize the most tedious parts of a music career:  business decisions, political backstabbing and creative disappointment.