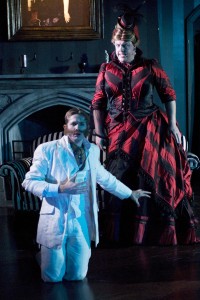 The best direction is usually transparent; when a play is really working, you’re not thinking about the director. But when it fails, the director inevitably shoulders the blame. Sean Graney, The Hypocrites founder, is never transparent. He likes to work with classic texts and, to varying degrees, reconstruct them with his fingerprints visible throughout. As long as you can accommodate his penchant for out-of-context non sequiturs, it mostly works, sometimes to wonderful effect.

Playwright Charles Ludlam died of complications from AIDS in 1987, in the twilight of Reagan’s reign, still in the early years of the above-ground emergence of gay culture—less than twenty years after Stonewall and less than a decade after the pansexual hedonism of Studio 54. In this environment, cross-dressing camp theater had come of age, with a dint of the avant-garde and a winking naughtiness. When Ludlam died, camp too was on its deathbed, at least as a politically subversive aesthetic idea; it lives on and succeeds or fails these days simply as entertainment palatable to increasingly mainstream audiences.

You might suspect that Ludlam saw this day coming, for his most prolific legacy, “The Mystery of Irma Vep,” first produced by his Ridiculous Theatrical Company in 1984, elevated the camp device of sending up cultural conventions into a masterful exploration of film and theater that not only flourished as comedy on the page but, in his construction of the play as an over-the-top quick-change vehicle with two actors of the same sex playing all the roles, male and female, through thirty-five costume changes, has the potential to astonish audiences with its stagecraft.

Potential because in the wrong hands, with the wrong cast, I fear that “Irma Vep” would make for a night most dreadful. Fortunately, this work is right in Sean Graney’s wheelhouse, and the casting of the Court Theatre production is brilliant.

The story is a sweeping parody of all sorts of camp-friendly tropes: Victorian gothic, horror films, even Hitchcock and Shakespeare. Lady Enid has recently joined the manor of her beloved Lord Edgar, with varying receptions from the two servants Jane Twisden and Nicodemus Underwood; all are haunted by the looming presence of Lord Edgar’s now-deceased first wife, Irma Vep. As the play progresses, the plot loses some clarity as the velocity of quick-changes accelerates, like the Tasmanian Devil spinning out of control in a Looney Tunes cartoon. Graney has a clever take on this at the end of the play: in his version, the structure blows up in a hilarious manner and the backstage machinations, always present in the audience’s imagination, take on a central role, without disrupting the increasingly irrelevant plot winding up center stage. Purists might argue that the revelation undermines the magic of this work; that perpetuating the conceit throughout reinforces its sinews, but Graney’s decision actually illuminates a structural brilliance to Ludlam’s creation: that the change in pacing and the concomitant increase in the speed of costume changes builds the comedic arc into a certain kind of frenzy  that takes over the play.

The casting of the hulking Chris Sullivan as Lady Enid/Nicodemus/Alcazar is ingenious. I’d seen Sullivan play “The Hairy Ape” earlier this year in Graney’s production at the Goodman, and had been blown away by the longing visceral rage that he brought to bear on that role, so much so that now I can’t picture another actor playing it. But likewise, I could not have imagined Sullivan pulling off the performance he delivers in “The Mystery of Irma Vep,” especially when he inhabits the Lady Enid. With his shaved head topped with an elaborate blonde coif and resplendent in the most fabulous of Victorian gowns (thanks to the noteworthy costume designs of Alison Siple), he prances around the stage like a hippo in a tutu from “Fantasia.” Erik Hellman, as Lord Edgar and everyone else, offers an instant sight gag as the diminutive man of the house next to this colosssus; he more than holds his own in spite of being consigned to the role of “straight” man throughout, with a comedically mannered performance.

Graney’s troupe takes the camp of Ludlam’s play and dials it up all the way, throwing in quite a few of their own flourishes—at least I believe they did, since I’ve never read the play nor seen it performed before. In general, it was impossible for me to distinguish where Ludlam left off and Graney picked up. For example, there’s a bizarrely hilarious dulcimer duet that seemed straight out of the madcap mind of Graney; only later did I find out that it was in the original. I guess maybe Graney can do transparent after all. (Brian Hieggelke)