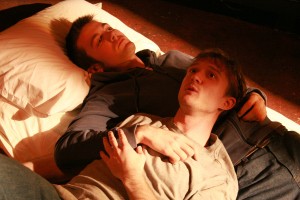 Read any Brothers Grimm lately? That stuff was pretty bloody before we sanitized it for modern child protection. But those yarns were only reflections of their times, simplified literary snapshots of our natural malice. It’s the same device used to great effect in “The Pillowman.”

Katurian (Andrew Jessop) is taken into custody and questioned about gruesome stories he’s written, tales similar to local child murders. He protests his innocence only to discover his guilt by influential association.

Jessop skillfully embodies Katurian’s confusion and disorientation, Peter Oyloe shows painful vulnerability as Michal, Katurian’s child-like brother. Tom Hickey and Johnny Garcia perform a vicious vaudeville as the case’s detectives; Hickey’s nuanced menace is both hilarious and threatening. Director Kimberly Senior’s staging places the audience uncomfortably close to the action, leaving no escape from the piece’s brutality. It’s a reminder that we can’t ignore our cruelty or destroy the records that commemorate it. (Lisa Buscani)