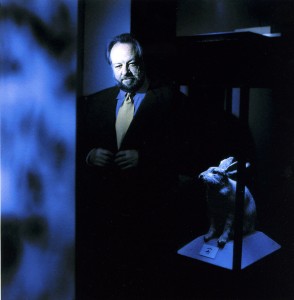 Ricky Jay is a master of deception, and chances are good that you’ve seen his work even if you have no idea who he is. With his company Deceptive Practices (motto: “Arcane knowledge on a need-to-know basis”), Jay has consulted and served as technical advisor for stage and screen alike, working on such films as “Forrest Gump” (he designed the wheelchair that made Gary Sinese look legless), David Mamet’s “The Spanish Prisoner” and Christopher Nolan’s “The Prestige” (he also acted in the latter two films), among others. Beyond that, Jay may be the world’s foremost sleight-of-hand artist, its greatest historian of magic and the art of the con, and the preeminent archivist and academic of human oddities, as explored in his quarterly, Jay’s Journal of Anomalies. He can also, by the way, throw a playing card so hard and fast as to pierce the rind of a watermelon, “that most prodigious of all household fruits,” as he refers to it.

For five nights at the beginning of December, Jay holds court in the Mamet-directed one-man show “A Rogue’s Gallery,” billed as a more personal and improvisational performance, at the Royal George. Jay was good enough to share some of his time after a long day on the set of the TV show “Flash Forward,” whose cast he recently joined. He plays, in his words, “a menacing character.” I’ve heard stories of how gruff and elusive Jay can be and what subjects he famously avoids; so, expecting gruff, I asked how he was doing. “Honestly, I’m thoroughly and completely exhausted, meaning that I will be like putty in your hands.”

A fine start. Jay was funny, charming, and seemed thoroughly happy to let the conversation stray wherever it might. “I have been reluctant,” Jay said, “to talk about personal stuff over the years, but to some extent ‘A Rogue’s Gallery’ can be more autobiographical, if it happens to go that way on a given night, so on that level I suppose there’s some intimacy. But I’m much too menacing to be intimate.” Jay will take the stage before a backdrop of more than a hundred images of playbills, posters and photographs he’s collected over the years. The audience will choose images and Jay will share some of what he knows about the subject of each selection, intermingling sleight of hand with stories of magicians and tricksters, as well as strange and almost unbelievable figures like Matthew Buchinger, one of Jay’s favorites.

“Buchinger was born in Anspach, near Nuremberg in 1674,” Jay told me, “and was incredibly accomplished as a calligrapher and a musician. He played more than six instruments, he danced the hornpipe, did trick shots with bowling balls and pins, played cards and dice, and the punch line is that he was twenty-nine-inches tall and had no arms and legs. He’s one of the world’s great overachievers.” Jay went on to call himself extraordinarily lucky to have acquired so many of Buchinger’s calligraphic works of art, of which he is considering mounting an exhibition at David Wilson’s fantastical Museum of Jurassic Technology in Los Angeles, also one of Jay’s favorites.

As a kid, Jay was always around and involved in sleight of hand. His grandfather introduced him to the art and some of its finest practitioners, who Jay eventually grew to study under. “I used to look in old books for material initially, for things that I might be able to perform that no one else was doing. The more I searched, however, the more I became incredibly excited by the history itself, and eventually did lots of reading and writing about that history, which had nothing to do with my performance. That’s actually one of the things that makes this new show exciting for me, because it does tie in both. There’s historical material and that turns into performance material, both in the telling of stories and in the exhibition of sleight of hand.”