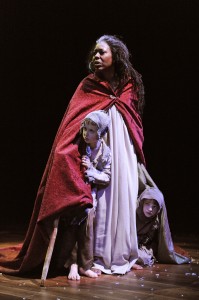 “I pay him a just wage,” defends Larry Yando’s Scrooge to the Ghost of Christmas Present (Penelope Walker) as the pair is eavesdropping on the Cratchits’ meager holiday feast which Tiny Tim (John Babbo) alone could easily devour in a single swoop.  “What is a just wage?” retorts the Ghost.  “What the market will bear,” says Scrooge.  And there you have it: Ebenezer Scrooge is a Republican.

It is easy to forget that Charles Dickens wrote “A Christmas Carol” primarily as an attack on self-righteous Victorian social justice, but with the entire country embroiled in a bitter debate about who actually “deserves” healthcare among the millions who cannot afford it this holiday season, lines such as “Are you to decide who is to live and die?” and “If they would rather die, let them do so and decrease the surplus population,” resonate with biting sting as more socially relevant than ever.  Ironically, Dickens’ challenge to the heart of the heartlessness of his own era helped set England on a trajectory towards national healthcare, which means Tiny Tim would get the treatment that he needs today in England, though not in America.

The three-decade plus production of Goodman’s “A Christmas Carol” has been casting color blindly for years, but in this case, the fact that the social conscience of the piece, Penelope Walker’s Ghost of Christmas Present, is portrayed by a female African American, cannot help but underscore the timely message.

Particular kudos to Yando who, on the third time out in this role, finally has found his full and authentic voice as Scrooge. One of Chicago’s best actors, bar none, Yando was wonderful from day one, to be sure, but this year there was much more nuance in how Scrooge actually makes his transformation. It’s not so much what he says nor even how he says it that has changed as much as how he reacts to what is happening around him. He takes it all in so carefully, so introspectively, that we really do come to see his heart restored, beat by beat, insight by insight. Here’s hoping that the holiday season may have the same restorative effect on the GOP as well.  (Dennis Polkow)