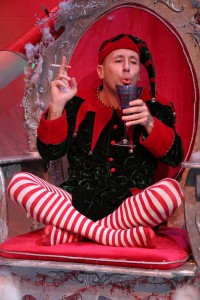 Even the most merry among us can stand a bit of humbug, especially when it’s delivered with the upoarious laughter inherent in David Sedaris’ “SantaLand Diaries.” The essay, a memoir of the author’s bizarre experience working in Macy’s SantaLand one New York Christmas, was Sedaris’ breakthrough when he read it on NPR back in 1992. Theater Wit has been producing the stage adaptation in Chicago as its holiday show for the last six years, three of those years with Mitchell Fain starring in the one-man family-unfriendly show as the misanthropic Macy’s elf, and they’ve got it down cold. Fain, diminutive and elfin himself, prances around the stage, cocktail in hand, delivering Sedaris’ bon mots with hilarious precision, even ad-libbing with the audience in character. Good luck trying to resist Fain’s charms, as he describes “one of the most frightening career opportunities I had ever come across” with kids who pee in the store’s artificial snow, the handlebar-mustachioed elf who delusionally thinks he’s a real ladies man and the co-worker so cheerful she asks if she can wear her costume home. In fact, if you’re not careful, you might even end up feeling downright cheerful yourself. (Brian Hieggelke)