by Brian Hieggelke
December 2, 2009Filed under: 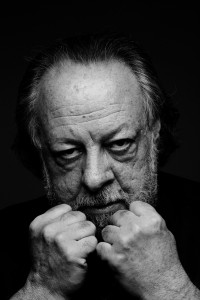 Ricky Jay opened “A Rogue’s Gallery” by reciting a poem that his friend Shel Silverstein wrote for him, in which Jay defends himself against a gun-wielding sore loser with only his playing cards. By the end of the evening, the idea of Jay fighting crime with cards seemed not only entirely possible, but paled in comparison to some of his other feats. Through random and sometimes haphazard processes, Jay selected audience members to join him on stage for various mesmerizing sleight-of-hand effects (he doesn’t call them tricks) in which he somehow managed to inscribe a book to someone before knowing her name, made cards seemingly teleport from one place to another, and blindly charted the course of a knight across a chess board without ever landing in the same space twice, while reciting Shakespeare and spontaneously calculating square roots. He also shared clips from some of the many films he’s been in and consulted on, and generally made people laugh tears with his remarkable stagecraft and wit. It sounds strange, and it was; but the kind of strange that causes every part of you all the way down to the cellular level to wonder how?

Not only were his sleights uncanny, but his story telling also amazed. Allowing the audience to guide him, Jay shared bits of arcane knowledge from his collection of magic memorabilia, mostly broadsides and photos, which were projected behind him on a screen. There were vintage images of Mexico’s answer to Houdini chained to a cactus, tightly bound brothers inside a cabinet who managed to play several musical instruments at once, a magician who draped a woman in sheets and made her levitate seven feet in the air before she disappeared completely, great prognosticators and manipulators, and so many other rare pieces of art yielding even rarer stories that the very breadth and width of Jay’s memory seems a magical feat in itself.

He told of attending a party at Siegfried and Roy’s (David Mamet, who directed Jay’s show, refused to meet them because he was terrified of what their street clothes might look like) at which a guest was urinated on by a tiger. Jay’s eloquence for his art and his reverence for the great performers of the past was infectious. The crowd was rapt throughout, though some of that attention might have been due to the fact the at least a few audience members were also sleight-of-hand artists. At the intermission I saw people pull out cards and do tricks for their dates while sharing theories as to how Jay worked his magic. How?

Regardless of what you call it—sleight-of-hand, magic, trickery (Jay humorously referred to himself as a “mentalist” at one point)—the irreducible fact is that Ricky Jay is a master of his art, which folds all of the above into a richly illuminating evening of theater. (Damien James)