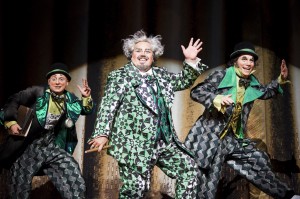 Traditional Cirque du Soleil fans—and they are legion—are likely to find this latest comedy-packed, vaudeville-style entry in the franchise a perplexing, even tedious experience in that it has little in common with past offerings. “Daniel, help me down from here,” says clown Wayne Wilson, caught on a rising microphone. “I can’t,” says Daniel Passer, “I’m not in the union.” So much for the Chicago topical humor (the show is dress-rehearsing here for a New York opening).

Still, the take-off on American “talent” shows is hysterical, though it is likely to be unappealing to those who actually like such shows. “Is there anyone with any talent here?” says emcee Schmelky (Jerry Kernion), and seat numbers of “volunteers” are read aloud to audition on stage. All are clowns, of course, although out of makeup and just initially “normal” enough that they could pass for actual audience members. Before long, we get a ventriloquist whose dummy is deaf (the ventriloquist silently moves his hands endlessly, imitating sign language), a streaker/contortionist as a “modern dancer” (Patrick de Valette) and “the oldest mime in the world” (Gordon White) who comes on stage with a walker and takes his time to pantomime a large glass box that takes him long stretches of time to make his way across to its four corners.  Cruel humor, to be sure, but funny nonetheless.

As for actual circus acts within the show, these are few and far between, and consist mostly of juggling and a couple of gymnasts, albeit all excellent, as you would expect. What we get instead are elaborate dance routines, colorful costumes and an overdose of skits with no overall theme to any of this other than apparently being scaled-down Cirque du Soleil stuff reconfigured for theater venues.  (Dennis Polkow)