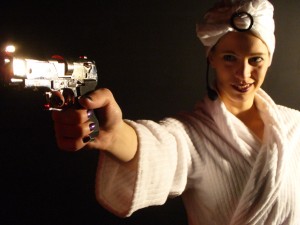 It’s the 1950s and a photographer with a secret is held captive by a monosyllabic giant and an alien femme fatale who resembles a hung-over Gloria Swanson. Flashbacks reveal more questions, making effective use of the characters’ internal and external dialogue.

Ron Kroll is sympathetic as a man tortured and ultimately doomed by his longings; Sara Gorsky is alluring and creepy as the alien with the ticking biological clock. Detectives Jim Hicks and Anthony Stamilio’s hard-boiled interrogatory vaudeville provides comic relief; Don Hall wrings laughs and loneliness out of minimal dialogue. The Mammals are a young company with a bright, distinctive future. (Lisa Buscani)