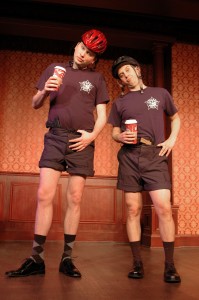 If the comedy revues at Second City hew to a familiar pattern, it’s for a purpose. I don’t always agree with that purpose, but the theater just reached its fiftieth anniversary, so something’s working.  The company’s latest mainstage show may not be its strongest, but it is worth seeing for two reasons: Brad Morris and Andy St. Clair.

“Taming of the Flu” feels especially traditional in its Second Cityness. (Longtime director Mick Napier is at the helm.) This isn’t humor that comes from uncomfortable introspection. The material and its execution is standard stuff. Ultimately it’s up to the cast to differentiate their show from years past and, on that score, Morris and St. Clair do most of the heavy lifting.

I barely noticed Morris three years ago when he joined the mainstage. It can take a little while for performers to figure out where they fit in, and Morris sorted things out by the time he hit the stage in 2008’s “No Country for Old White Men.”

This is his fourth revue with Second City and he has enough experience under his belt to grab hold of the show and steer it in the right direction. Physically Morris is the smallest guy on stage, but he has a grounding presence that makes you take his comedy seriously. He can assume the casual confidence of French President Nicolas Sarkozy in one sketch, the fluster of an incompetent doctor in the next.

“I tell you why fare hike, my friend,” he says as a Pakistani cab driver who goes on a rant about the various disgusting things people do in the backseat of his car. That’s a tricky stereotype—there are so many ways the immigrant cab driver bit could have gone wrong—but Morris is enough of an actor to play it straight and keep it honest.

Morris isn’t really about the large gesture so much as the small detail. Watch the way he portrays a guy dozing off on a plane, mouth agape, head jerking back every so often. Morris makes you wait for it, but there’s a big payoff.

The strongest sketch features Morris alongside Andy St. Clair as a couple of Chicago bike cops. The scene is both a sight gag and a perfect example of actors playing it loose and easy. Morris has some of the best lines (about his vacation to Hammond: “What if Vegas landed in Gary?”), but it says a lot about the talents of both performers that the scene works as well as it does. The premise isn’t particularly inspired, and yet the sketch feels incredibly fresh and full of possibilities.

St. Clair is a new addition to the mainstage and he arrives fully formed—a reliably comedic presence who can juice the energy of a scene by simply appearing in it. St. Clair and Morris are physical opposites, and visually it is a nice effect. St. Clair is tall and amusingly unsettled—even when he’s standing still his eyes are roaming the room. St. Clair can play a guy who is merely sitting in the background of a scene (trapped watching the worst coffeehouse open mic ever) and make it look interesting.

St. Clair proved his chops as a solo performer on the e.t.c. stage a few years ago. He can work a character all by himself, and director Napier was smart to give St. Clair room to do it here. Riffing on cheesy Italian mobster clichés, St. Clair plays a wise guy offering various members of the audience “medical protection.”

The shirt is open to his navel, the chest hair splendiferous, the heavy gold chain and sunglasses icing on the cake.  It’s something of a missed opportunity—St. Clair channels a collection of “Soprano”-like tics and it would have been intriguing to see him spoof a more local (i.e. Melrose Park) version. So what. Doesn’t make the scene any less funny.  (Nina Metz)