by Dennis Polkow
December 7, 2009Filed under: 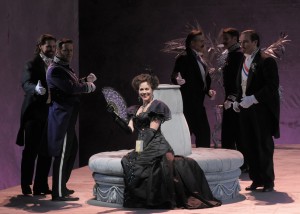 “I will wear the orchestra out with my dance card, ” says the Merry Widow herself (Elizabeth Futral) at the Act I party where her countrymen are trying to make sure that her fortune stays within their country. The irony is that the old gal almost didn’t have an orchestra at all, as the Lyric Opera Orchestra, which had been playing without a contract since the season began nearly three months ago, had threatened a strike by curtain time of Saturday’s opening. A tentative agreement had been reached early Friday morning, averting a work stoppage.

Lyric Opera has always had a snobby attitude about “The Merry Widow.” Lyric founder Carol Fox wouldn’t touch it since it was an operetta and not an opera, but Ardis Krainik found herself presenting it twice during the 1980s: the first with Evelyn Lear in the company’s first-ever production, and again in 1986 as a vehicle for Kiri Te Kanawa, although Te Kanawa pulled out and Maria Ewing took her place. This third-ever company production sees the pendulum swing to the opposite direction, given that it was conceived around veteran Chicago director Gary Griffin and the vast majority of those involved with it come from the theater world rather than the opera world. That’s great in that it means that those long sections of spoken dialogue are performed by genuine actors, but when the singing begins, we’re often hearing “show” voices rather than operatic voices, which means that the music often loses its sparkle and luster.

A huge part of the problem is the decision to sing the work in English, and a poor translation at that, made by Sheldon Harnick of “Fiddler on the Roof” fame, that chops mercilessly and at best merely paraphrases the original in a decidedly tongue-in-cheek manner, and often reinterprets it completely. Amplification is discretely used for the spoken sections but eliminated during the vocal sections. Even so, it is often a chore to understand lines, as there are no subtitles during the spoken sections and if they were not employed during the sung sections, diction was so muddy that meaning and context would be lost.

It is also clear that the cavernous canvas of a large opera house can be too unwieldy for those used to working in theaters with stages half the size of an opera stage, and to audiences a third the size of the Civic Opera House. The proceedings are excessively static, even when choreography is going on, which is only a small group within a scene and is presented satirically. There is lots of empty space, sometimes absurdly so, as when a mere seven and somewhat stilted can-can dancers hit the stage in Act III for the party at Maxim’s with half of the stage “letterboxed” on the sides with red backdrops. Ironically, the text had just made reference to how expensive the evening’s entertainment would be, but this is clearly recession-era “extravagance.” Other absurdities include shoddy two-dimensional sepia-toned backdrops mysteriously coming and going that take up a mere quarter of the stage, and a projected moon in Act II that distractingly grows and grows beyond the scenery during the love-scene finale.

The one saving grace of the production is Elizabeth Futral’s portrayal of Hanna, a signature role for the former Ryan Center alumna. Though her Act I entrance was muddily sung on opening night, she more than compensated with her grace and charm, and particularly with a moving rendition of the “Vilja” song.  (Dennis Polkow)