by Lisa Buscani
December 7, 2009Filed under: 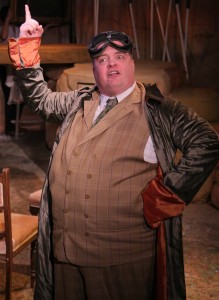 Doug Post’s anthropomorphic extravaganza is back in Chicago after a twenty-year absence. Originating at the old Organic Lab space, the musical adaptation of Kenneth Grahame’s whimsical parables mocks Edwardian England’s social convention through the stories of the animal kingdom living in and around the Thames.

Mole (Jessica Anne Cook) is new to the river and quickly adopted by Rat (Jeremy Trager), who introduces him to the river folk including Toad (Thomas M. Shea), a pompous creature with a thing for pretense and combustible engines. The talented ensemble handles the singing, dancing and multiple casting with ease. Shea’s Toad is ego-riffic yet likeable. Cook and Trager capture the sweet camaraderie and class elitism common throughout the (human and animal) kingdom. Post’s songs run the gamut of styles from punk to reggae to Broadway ballads and belters. Alan Donohue’s set and Ricky Lurie’s costumes give the show the countrified functionality it requires. (Lisa Buscani)