by Sharon Hoyer
December 8, 2009Filed under: 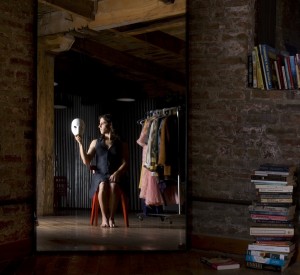 Rebecca Kling’s solo performance employs storytelling, video and theatrical movement to relate her experiences as a transgender woman. Supported by the Critical Fierceness grant—a microgrant offered by Chances Dances to queer artists in Chicago—and developed during Kling’s tenure in the Links Hall Charged Bodies mentorship program, Trans Form peels back the trans label and its mystique to probe the complications of human identity. In a rehearsal clip, Kling tells a story about the hassles and minor indignities of legally changing her name and switching the gender marker on her drivers license from male to female. With good nature and gentle humor the five-minute monologue not only riffs on the frustrations of living in a bureaucratic system, but also gives one pause to consider the blurred line between private life and public identity. It plays out like a Kafka short story that ends in triumph. (Sharon Hoyer)