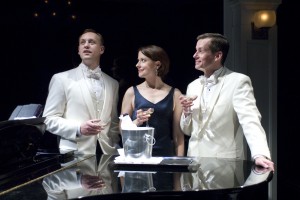 When the Noël Coward revue “Oh, Coward!” opened in late 1972, Coward himself was still around but his detached and wry style had fallen way out of fashion. British actor/director/playwright Roderick Cook thought that the time was right to remind us all of what an original voice Coward had been, and the result was a hit show that even Coward himself came to check out in early 1973 in what turned out to be his last public appearance (he died in March of that year).

Cook’s idea was astonishingly simple: two male performers—one was originally Cook himself—and one female performer, all in evening clothes and sipping champagne, singing Coward songs and acting out scenes from his best-known plays. It was a passport to another era, and nearly four decades later, it feels as fresh as ever, at least in the hands of Writers’ Theatre. Entering the performance space in the back of a suburban bookstore, you are offered a glass of champagne as you head into an intimate theater transformed into an elegant, art deco nightclub of the 1930s. Music director Doug Peck greets you in tails as he is playing Coward songs on a grand piano and you find your way to small tables encircling the space in inviting, cabaret style.

Director Jim Corti has cut the show and has tinkered with the format in that the stage scenes are gone, only small Coward anecdotes remain. Yet given the fact that Coward’s plays are better known today and more often performed than his vintage songs, this feels like a reasonable compromise. Some of the songs that were originally part of the show are gone, but others have been more effectively substituted, notably “Twentieth Century Blues” and the obligatory “The Party’s Over Now,” which always closed Coward’s own cabaret act and makes for a more fitting finale; the new numbers have been given new arrangements by Peck that fit seamlessly into the proceedings.

Cook originally had two male performers because he was not a singer (neither, it could be argued, was Coward himself) and the trio format at times feels a bit redundant in that it means that the two males (Rob Lindsey and John Sanders) are both emulating the Coward style, with varying degrees of success and sometimes in direct antiphonal style that divides up the “voice” or a narration of a particular number. Kate Fry, the one female and lone “serious” voice breaks our heart with her poignancy and is a perfect foil to the men.

And then there are the songs. I defy those who think they know a good lyric when they hear one to experience Coward songs and remain unaffected: they remain the perfect combination of right brain, left brain and make so much of what has been penned since sound so trivial by comparison. Sure, there are the usual holiday offerings, but if you want to be part of a very special party, this is a can’t-miss, for sure.  (Dennis Polkow)