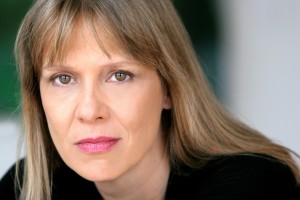 “There are two things I hate a lot,” says Steppenwolf Theatre Ensemble Member Amy Morton, “getting dressed up and talking to people publicly.  I’d rather pull the skin off my face.”

I’m sitting with the seasoned stage performer and director in the third-floor lobby of the Steppenwolf’s Upstairs Theater, and Morton looks confident and stylish in a smart getup that includes black slacks, a charcoal cable cardigan and a crimson scarf that unostentatiously hangs around her neck. There’s a slight chill in the air, and I equate it to the large uninsulated window next to our table where this interview takes place, and not to Morton’s blistering comment, typical of this tell-it-like-it-is gal.

I had first met Morton in 2002, when I was roaming the hallways of the Steppenwolf as an intern, and she had just finished directing David Mamet’s “Glengarry Glen Ross.”  Now, almost a decade later, on the heels of a Tony Award-nominated turn in playwright (and fellow Steppenwolf ensemble member) Tracy Letts’ “August: Osage County” (which she reprised on Broadway earlier this year), on the cusp of appearing on the big screen in a featured role opposite George Clooney in this month’s “Up in the Air” and on the verge of premiering a new revival of Mamet’s “American Buffalo,” Morton has remained Morton:  smart, salty and down to earth, the stalwart of the Steppenwolf set who refuses stardom, but who is finally earning the respect and recognition nationally that she’s had in Chicago for decades.

Maybe it’s this lack of overexposure, or the fact that her press duties haven’t crept into the triple digits (as they reportedly have for colleague Letts) that allows Morton to discuss her experiences with the multiple award-winning “August” as if it was yesterday. “It was a bitch, that thing,” she says laughing. “It was three-and-a-half hours of getting really sad or getting really mad. And your body doesn’t know you’re lying, so it holds that stress. I don’t think I could have gotten through that show without a chiropractor and massage therapist.” So how many times, throughout runs in Chicago, London and Broadway (twice) over two years, did she actually set off those emotional and physical “pyrotechnics,” Morton’s nickname for her character’s tsunami of drama that famously ends the second act?  “I’m not a counter, and if I had started counting I would have blown my brains out. I think three or four hundred. I don’t know. It’s a sick number.”

And yet, Morton can be as passionately vocal about that play’s rewards as she is about its demands. She’s gone on record to say how “August” could remain the pinnacle of her career as an actor (“Absolutely, and I’m fine with that.”), and she continues to marvel at the impact it had on audiences. “That is the only show I’ve been in—and this happened in Chicago and New York—where I would walk outside the stage door and people would literally ask me for a hug.” Morton, who doesn’t immediately strike one as the touchy-feely type, clarifies. “I am a physically private person, but you can tell the difference between a crazy fan who’s stupid, and someone who’s been moved by the play. And that’s when I go, ‘yeah, I can give you a hug.’” 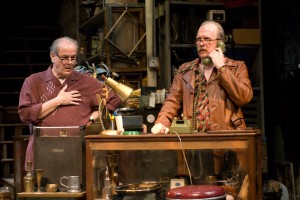 It’s a curious statement coming from the director who twice helmed “Dublin Carol,” Conor McPherson’s relentlessly bleak account of an alcoholic at Christmas, most recently for Steppenwolf in 2008, but it’s soon followed with an anecdote that’s unmistakably Morton. “Remains Theatre [the Chicago ensemble Morton worked with pre-Steppenwolf] did a production of ‘American Buffalo’ around Christmas in the early nineties.  Our logo was a Georgia O’Keefe-looking cow skull graphic, and we put a Christmas hat on the horn, and the card said ‘Merry Fucking Christmas from Remains, come see the show.’  We got a huge amount of flack for that, but we liked it. Anyway, you’ll never see me do a holiday show. It just feels against my nature. But I guess never say never.”

When I ask Morton, a self-proclaimed “laidback” artist who doesn’t seem to take herself too seriously, if “never say never” could be her motto, she erupts into laughter. “Seriously, do you know anybody who says, ‘this is my motto.’ Nobody has a motto. They’re all liars who are coming up with something to answer that question. God, if I had a motto I’d be a loser.” At least she’s consistent:  a Proust Questionnaire that Morton completed for Steppenwolf’s Backstage Magazine circa 2002 found her stating “Mottos are for suckers.”  That same questionnaire also found her naming Margaret Sanger as the historical figure she most admired, and when I ask what a female director might bring to this new production of “American Buffalo,” Mamet’s microcosm of men and American business, she states simply, “I don’t think it makes a difference, it’s just a really good play that I know in my bones, and if it were three women up there talking I would still do it.  There’s not an interesting answer to that question.”

What is interesting is how Morton, who hasn’t consciously sought out work in Hollywood for many years, landed a plum role in a high-profile film. “Up in the Air” Writer-Director Jason Reitman, having seen her early during the Broadway run of “August,” asked to meet with Morton and essentially offered her the part based on the strength of that performance. And while she’ll admit to a renewed interest in film work (“It certainly does spark the desire for the paycheck. Do you know what I mean?”), she’s upfront about her need to get more comfortable with the medium: “Jason told me more than once, ‘That’s really good. I need about 75 percent of that. And I was like, ‘I’m playing to the back row, aren’t I?’  And he said, ‘Yeah, you’re eyes are buggin’ out.’ So I was grateful he had my back.”

And then there’s Australia, and the Sydney Theatre Company’s offer to Morton and “August: Osage County”’s original cast members to reprise their roles down under in late 2010.  “It’s not like I’m dying to put that dress back on and scream and gnash my teeth again, or wake up at one in the afternoon because I can’t drag myself out of bed before that, but who wouldn’t want to go to Australia?  You know what I mean?”

“Action counts, action talks and bullshit walks,” is a line of dialogue from “American Buffalo,” but it could also be the summation of Morton’s attitude, as well as of her career.  Just don’t call it her motto. “Stop trying to give me a motto!  You can throw whatever you want.  There’s nothing that’s going to stick.”

“American Buffalo” is in previews for a December 13 opening and runs through February 7, 2010, at the Steppenwolf Theatre Company.  Visit www.steppenwolf.org for additional information.