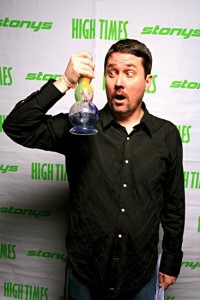 What better way to spend a lazy Sunday afternoon than with a bunch of potheads listening to a pothead make jokes about pot. Today at 4:20pm, during a special single-matinee performance, a giggling crowd actually has something to laugh at. Upon entering the lobby, smoke-machine fog billows out of the theater doors.

Doug Benson may be best known for his appearances on NBC’s “Last Comic Standing” and various pop-culture commentary shows like “Best Week Ever” on VH1, but to a different audience, he is the proclaimed King of Pot Comedy. Besides his spoof on the feminist spoken-word series “The Vagina Monologues,” appropriately titled “The Marijuana Logs,” Benson has parodied the documentary about eating nothing but McDonalds for thirty days, making “Super High Me.” Benson did nothing but smoke pot for thirty days straight and functioned just as good if not better than usual.

Benson recently received the opportunity any “stoner comedian” would trade his best bong for, getting to share the stage with cannabis culture icon Tommy Chong during a tour of the “Marijuana Logs” shortly after Chong was released from jail.

“In Vancouver, if people throw weed on stage it’s totally cool. It’s legal-ish, but in Seattle, it’s a different story and Tommy just up and quits the next day because just being around pot would violate his probation. They’re throwing it at his feet. There’s nowhere to run. He eventually came back to make up a few shows, but it kind of killed the momentum of the tour.” (Jonathan Kaplan)