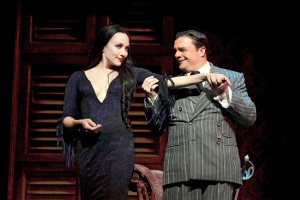 “They’re creepy and they’re kooky / Mysterious and spooky…”  Well, at least they used to be, before the Addams Family became a Broadway-bound musical.

It all looked so great on paper: Broadway superstars Nathan Lane and Bebe Neuwirth as Gomez and Morticia, the librettists (Marshall Brickman and Rick Elice) and choreographer (Sergio Trujillo) of “Jersey Boys”—how could it miss?

Oddly enough, by forgetting that the perpetual appeal of the Addams Family and the common thread running through its incarnation from magazine cartoon characters to television series to hit movies has been the dark and macabre sensibility of the family itself.

Despite a blizzard, there was not an empty seat in sight at last Wednesday’s world-premiere performance of “The Addams Family: A New Musical” and anticipation was high, even with a slightly delayed curtain due to the weather.

When the lights began going on and off to loud electrical noises and the theater darkened and a spooky, four-note ostinato began sounding, the crowd response was that of rock-concert excitement. By the time a spotlight shown on a single hand (i.e., Thing) peaking out of a red curtain that pulled back to the entire “family” in a cemetery under a full moon facing the audience in its familiar and iconic pose, the cheers were deafening.

As things calm down, Nathan Lane’s Gomez sighs and in a slightly Latino accent says, “Ah, it’s bad to be alive,” before leading the family and its dead ancestors in a low-energy opening number called “The Clandango” that seeks to draw ties to its past that is, as Lane keeps singing, “We are part of a chain.” It is a remarkably squandered moment that cuts the high-energy anticipation level in half.

Kevin Chamberlin’s Uncle Fester comes forward to narrate and does a spot-on Jackie Coogan imitation, noting that tragedy is “the soul of drama, the bane of family” as a tiny banjo is handed to him by Thing and he begins crooning in falsetto for what seems like forever about—are you ready for this?— love.

The creators of “The Addams Family” musical have taken great pains to communicate that they were basing their show on the original New Yorker cartoons, not the television show and movies that spun off thereof. However, Addams lore came about quite gradually, character by character, and ABC pushed Charles Addams when they bought the characters for television to come up with elaborate character descriptions and names (they had never even been named before). Those descriptions began to inform the published cartoons as well, and later, the movies (Addams was dead by then), and even a cartoon series, another sitcom and series of video games. And the character traits were consistent. Here, they are being rewritten, or my guess is, the writers just didn’t get the proper spirit of any of this and went off on their own limb that had little to do with the Addams Family. It’s the worst of all worlds: use a brand name that you know will create interest, but then write your own play that has nothing to do with the ethos of the Addams Family in any form.

For reasons that are never made clear, Pugsley (Adam Riegler) is still a small boy but Wednesday (Krysta Rodriquez) is fully grown and twice his size, making the scenes where she literally tortures her little brother onstage, while he is shrieking and chained up, a bit awkward. True violence, after all, is rare in the Addams franchise: it is discussed and anticipated, but rarely shown.

Wednesday’s pigtails are cut off by way of full initiation into the family clan and—would you believe?—she performs the rest of the show sporting a wholesome bob that makes Annette Funicello look sultry. When she sings, she is a power balladeer in search of a tune and her concern is a guy from Ohio (Wesley Taylor)—complete with family jokes about swing states—that she is in love with. (Again, not the Wednesday we know, who was deadpan, morose and took narcissism and self-absorption to new lows.)

It will be Wednesday, by the way, who will pressure her boyfriend into marrying her, and he will be the reluctant one. He will be the smart and cultured voice, she the dumb and illiterate one who will protest, “I don’t understand your references: I was home-schooled.” 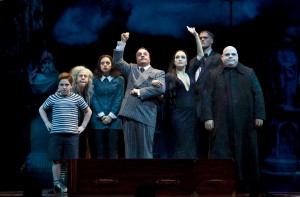 Oh, that’s right: kids learn so much more from formal monochromatic schooling in Ohio than they ever would growing up in a Gothic-style mansion in New York City loaded with history and artifacts from myriads of cultures. The pre-musical Addams kids always had trouble in school, when they would be forced to attend by truant officers, because they knew more than the teachers, not just the kids.

Bebe Neuwirth’s Morticia looks great, for sure, but her speaking style is far too emotional and excitable and she is concerned about growing old and is irrationally jealous of Gomez fooling around with the mother of Wednesday’s boyfriend when the pair are caught doing a Tango together. Sure.

When Morticia sings, she sounds more like you might expect Lurch to sound (when Lurch finally does sing after grunting all night, it is a Robert Goulet-like aria at the climax of the show), with a low, throaty vibrato and indistinct pitch, the opposite of Carolyn Jones’ pre-Yoko Ono high-pitched avant-garde Japanese howling.

Nathan Lane’s Gomez is too self-consciously comic (the Addams’ were always funny, but the biggest part of the joke was always that they never knew they were being funny) and neither physically confident nor energetic enough.

This Gomez never stands on his head, doesn’t crash model trains, nor fences or judo flips his guests for fun.  His one sword fight is with Morticia and occurs when they are actually mad at one another rather than the Addams’ love of swordplay for its own sake.

Grandmama (Jackie Hoffman), here called Grandma and complaining about elderly ailments and flatulence, sees herself and is seen by the others as senile, old and unattractive (the non-singing Addams’ used to marvel at the beauty of her free hair).

A side plot that ends up dominating far too much of the show involves the parents of Wednesday’s boyfriend coming to visit, and each get their own songs and issues so that we distractingly have no less than three couples—Gomez and Morticia, Wednesday and her boyfriend and the boyfriend’s parents—all having relationship problems and interacting with one another about same, often in song: kind of like a bad “Rocky Horror Picture Show” imitation cross-fertilizing with “The Edge of Night.” Wednesday and her boyfriend even get a rock-inspired “High School Musical”–like power love duet.

Along the way, Pugsley gets an “Annie”–like anthem and is carted away by a lizard under his bed. At one point, for no particular reason, the family stops the action and poses together and snaps their fingers to Vic Mizzy’s “Addams Family Theme,” which compared to the songs we have been hearing, sounds like Mozart by comparison. Oh, did I forget to mention that there is a giant squid that grabs a guest, and that scenario becomes an aria of its own?

It is beyond bafflement how so much time, talent, money and energy could be put into something based on such a familiar commodity and, yet, the essential ingredient that any schoolchild would know about the Addams Family, i.e., their uniquely macabre sensibility, could be so left out in the dark, uh, light.

I’ve never seen that musical, but it sounds ridiculous! A whole song about a squid? Morticia with Lurch’s voice?! Pugsley is the same age, but Wednesday is older?!! Gomez never doing his usual stuff? What were the writers THINKING?!

This nails it. If you loved The Addams Family show, you’ll hate this musical. They get all the characters wrong, as if they didn’t understood what made them funny in the first place. The humor in the Addams family is that they’re all very straight. They just happen to like weird things and others’ reactions to that is what is funny. Making Gomez over the top goofy just destroys his character.