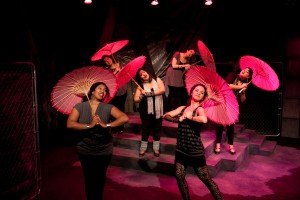 After a long, dramatic love affair with the monologue, which revealed playwright Tanya Saracho to be a spellbinding storyteller in two languages, equipped with a sharp eye, huge heart and delicious (and sometimes dirty) sense of humor, Saracho ventured into dialogue. Now, she has returned to the monologue.

In celebration of its tenth anniversary as Chicago’s “All-Latina Theatre” company, Teatro Luna has revived their 2007 hit, “Lunactic(a)s,” which was written as a collective affair between Saracho and the hugely talented ladies at Luna. It’s easy to understand why. With several of the original standout performers reprising their parts, references updated to make the piece relevant to Chicago in 2009, and the addition of a show-stopping musical number (the perfectly pop and brilliant pastiche original score is by chameleon composer Tamara Roberts), “Lunatic(a)s” remains a crowd-pleasing, fun and proven commodity. And yet. Having seen most of Luna’s theatrical canon these past five years, including the brilliant “Machos,” which has deserved every remount it’s had, “Quita Mitos,” the hilarious and oftentimes poignant triptych of monologues, and “S-E-X-oh!”, probably the best of their ensemble-built shows, “Lunatic(a)s” is simply not their best material, and I wonder why Luna didn’t instead showcase a potpourri or greatest-hits remount that could have drawn from some of the aforementioned shows. And while the set pieces—monologue, small scenes, musical numbers—have been placed in a deliberate order to create a sense of dramatic highs and lows, the fact that they are stand-alone units offering variations on the same theme(s), means they need to build from nothing into a climax each and every time. The fragmentary repetitiveness of this means that the evening oftentimes feels long and repetitive (it’s an intermissionless ninety minutes), and Saracho as director has not calibrated the overall pace to make up for this.

The writing on the piece has been credited to the collective ensemble, yet it’s hard not to notice how much of “Lunatic(a)s” sounds almost entirely, in its tone, style and sensibility, as if it had come from Saracho’s pen. For here is the Saracho as “angry and emotional Latina,” a quality she has gone on to self-consciously mock in her later comedies, even as it informs this show’s concern with how the sacred moon—not to mention female biology, jealousy and the masculine sex—cause temporary insanity in the modern-day girl. So while Saracho’s writing entertains, it also meanders. While Saracho’s minor scenes crackle due to a wonderful ear for her unique Spanish-English hybrid, rare are the times when she captures here moments as she does in later work. This is early Saracho, for sure, and without the challenge of writing for characters with a beginning, middle and end, the ephiphanic comedic highs (as in “Jarred”) or tragic lows (as in “Kita y Fernanda”) are missing, as well as missed.

Still, the performances carry the evening, the writing has its moments and the musical comedy elements (there is a sequence that could rival “Chicago”’s “Cell Block Tango” number in its sexual and musical verve) are outstanding. It’s a worthwhile evening for anyone who loves Luna, and especially for anyone who has never experienced them before. But I’m spoiled, having seen Saracho and her company’s creative evolution since the original production, and know that these are ladies capable of much bigger game. (Fabrizio Almeida)