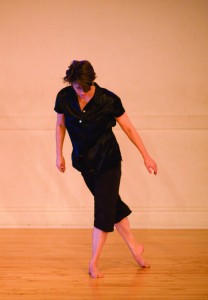 Rachel Thorne Germond’s work is often characterized by headiness; she is known to create high-concept pieces that deconstruct a topic head on (think explorations of Hollywood personae like Judy Garland and Marilyn Monroe). But one of the two works-in-progress presented by Germond this weekend is a collaborative, spontaneous effort, developed entirely from simple phrases generated by the ensemble.

“It feels really honest to me,” Germond says of the new approach. “I wrote a lot of grants last summer and didn’t get any of them. I got in the studio and it was a big relief to not have to go in with an idea of what you need to express. It’s a little scary too, because it’s harder to write about. It has a life of its own and I’m just directing it and making it clearer.”

Germond emphasizes the centrality of Klein technique to the choreographic process; about half of each rehearsal was spent working on the method with her quartet of dancers, who range in age from early twenties to mid-forties. “With dance,” Germond says, “you’re coming up with a shared vocabulary and teaching that vocabulary to the audience. Work on the technique brings us together in thinking about movement the same way.”

The result is “Fantastical Folk Dance,’ an appropriately populist product of group experimentation and an interest in patterns, which sparked Germond’s curiosity while teaching children.

“I’m kind of a heady person, but at the same time I struggle with trying to keep things really basic as an artist. These kids are working with math, so I decided to explore patterns. And with kids you have to keep it really simple.”

Germond also performs her solo work-in-progress, “Look at Me,” a future evening-length performance about a woman fighting for her life. Germond was approached by composer Insook Chol to create a dance to her vocal score, which was composed while Chol was recovering from breast cancer—a personal subject for Germond, whose mother passed away of breast cancer ten years ago. Bedecked in sequined gown, long wig and boxing gloves, Germond punches the ground like a fighter coming out of TKO.

“I was thinking about Christmas and first snowfall. I have this children’s toy where you press a button and balls fly around. It seemed emblematic of chance. At the end, I take one of the gloves off and press down on the toy. It has this sense of going through struggle. It has a fantastical feel to it.”

Germond shares the concert with Lucy Vurusic Riner, who presents three dances on the theme of motherhood. “She’s got a great group of dancers and they’re all mothers,” Germond says of Riner’s new work. “It’s a Chicago conundrum; a lot of women in their thirties drop out of the dance community when they have kids. [Lucy’s] just had two children herself and she’s trying to investigate that reality and move forward. It’s that approach that interests me.” (Sharon Hoyer)