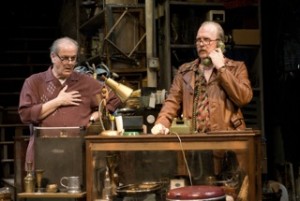 This is one of those groundbreaking plays—not just for Chicago, but American theater—that makes a remount particularly anxiety-provoking. Chicago native David Mamet wrote “American Buffalo” in 1975, and it premiered at The Goodman in a production that helped put both on the map. Mamet has gone on to an illustrious stage and film career, and “American Buffalo” has what are now his unmistakable calling cards: strikingly vulgar dialogue, usually in the form of long tragi-comic tirades, circling around questions of masculinity, power and identity. The plot is a simple, tight three-actor format centering around the ill-fated heist of a rare American Buffalo nickel by three generations of white male American losers. Amy Morton’s direction is astute but conservative; she’s clearly trying to hit all the original notes. But while Tracy Letts carries the show as the desperate misanthropic Teach, the way Francis Guinan and Patrick Andrews play their parts—the bumbling junk-shop owner and dependent young ex-junkie he’s adopted—feel one-dimensional. (Andrews takes on a strange stilted monotone that’s especially distracting.) Their limited performances mirror the play as a whole, which feels more like a fossil than a relevant work of art. (Monica Westin)