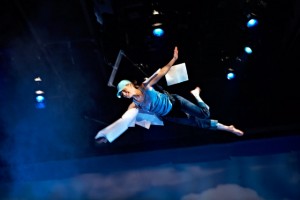 Chances are excellent that anyone reading this dreamt they were flying last night, so psychologists tell us. If you’re lucky, like me, you sometimes wake up remembering that you did, and even the memory of the sensation will give your day a lift. The more things change, the more they stay the same. Despite the fact that you or I could get on a jet today (just heard a passing plane as I write this), somehow being squeezed and seat-belted into a small seat surrounded by strangers and a flight crew passing out peanuts and soft drinks as you occasionally look out tiny windows of a large tube to notice clouds far beneath you is somehow not the same as being free in the air.

Greek religion—now called Greek “mythology” because other religions have since replaced it and so that we won’t get sued for teaching it in our schools—noticed this long ago. It forms the climactic element of the story of Minos II of Crete, grandson of Zeus and Europa, when the inventor Daedalus and his son Icarus are imprisoned and escape via the inventor concocting wings for the two of them. Any grade-schooler knows the tragic end to the story, and at the world premiere of Lookingglass artistic director David Catlin’s “Icarus” that opened on Sunday night, that familiarity is used as an effective flashback device.

Jarringly, the show begins with those little bell tones that we hear before a flight attendant starts speaking on a flight, and we are given “flight” instructions. We soon hear about “patient x” whom, we are told, “has fallen…” long cadence-like pause, “into a deep, catatonic state.” And there he is in a straitjacket, to make the point. We are then given the entire Icarus story in the form of a press conference as a prologue before it unfolds in its full context of the Minos court.

The six actor/gymnasts most of whom take on multiple roles not only speak their parts in a fully involved manner but, when movement is called for, they are always ready to oblige in a convincing way. Need a minotaur? No problem, one wraps her legs around the other’s head—upside-down, of course—wraps her hands around the waist of her partner and there you have one. Flight? Dreams of flight are handled in a ballet-like manner with the flier being held up by a partner; actual flight, achieved via cables and with clouds projected around them, is surprisingly artful and effective. The audience becomes involved as it aims supplied paper airplanes at the stage on cue.

But most touching is the story of a father (Larry DiStasi) and his son (Lindsey Whiting) and the way that their relationship plays out so tragically. Whiting makes a terrifically clumsy and naughty Icarus, DiStatsi a sometimes impatient but loving father. So much is said without words, such as the way that Icarus hangs on his father, at one point, actually sitting up on his head, clinging to him so trustingly. The tragic flight, a solo flight for Icarus in this version, is gripping and when we return to the father’s present and his existential despair at what has transpired, our hearts break right along with him.  (Dennis Polkow)