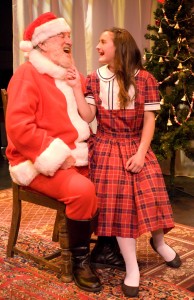 Yes, Virginia, there is a musical version of “Miracle on 34th Street.”  It is called “Here’s Love” and was written by Meredith Wilson of “The Music Man” fame, and in newer versions is sometimes called “It’s Beginning to Look a Lot Like Christmas” since Wilson also wrote that classic Christmas song and it was used in revivals.  Oddly, none of the material from the original 1963 Broadway musical nor its revivals are featured in what is being billed as Porchlight Musical Theatre’s “musical” adaptation of “Miracle on 34th Street.”  “Musical,” in this case, simply means that fragments of a handful of Christmas carols are distractingly used as scene-changing transitions, usually sung in unison by cast members karaoke style to canned accompaniment with varying degrees of successful synchronization.

However, aside from that considerable caveat, the show is delightful. This is a story that works wonderfully well as a live theatrical experience since the audience, as it were, ends up acting almost in notary fashion for the proceedings, which as lovers of the classic 1947 film or its remakes know, climaxes in a courtroom. Along with the judge, it is we who end up deciding whether or not “Kris Kringle” is the real deal or a lunatic.  As played by veteran Chicago actor Jim Sherman—without whom it would be impossible to imagine all of this working—we are totally taken in. Sherman’s entrance as part of the Macy’s Thanksgiving Day Parade is handled with great fanfare and when he takes the stage, he is irresistible.

Aside from carrying his own padding and having grown a long beard for the occasion, there are those little touches that make Sherman’s physical incarnation of the classic Santa look seem so lifelike: a sprig of holly in his hat fur, the faint paisley pattern in the deep red of his velvet costume that gives him an old-fashioned touch of “Father Christmas” and the fact that it doesn’t look like a costume at all the way that Sherman bears himself in it, but clothes the guy has lived in. Yet, even out of Santa garb, Sherman’s Kringle bears himself in a Christmas manner, wearing red-patterned ties, a poinsettia corsage and sporting a glittering red, snowflake-patterned cane. His deep but caring voice, the sparkle in his eyes (indeed what Clement Moore would call a “twinkle”) and an inviting and open manner mean that even the most cynical of us are quickly eating out of his hand.

The way that director L. Walter Stearns has staged this new production means that the audience remains actively involved from beginning to end. We are the parade audience, and we are excited when Santa comes out to us. Some of the kids that sit on Santa’s lap and chat with him are children from the audience mixed in with actors, and it’s a tribute to both that there is so little difference. But perhaps the best touch of all is the way that Santa, out of costume, disappears after his court “miracle”—it’s Christmas Eve, after all—and is not seen at all in subsequent scenes, a great touch. This gives his curtain call in full costume greater impact and the show spills over into real life by having Santa take his throne and audience members leave greeting him, many—including adults—actually sitting on his lap and chatting away or having a picture taken.  (Dennis Polkow)