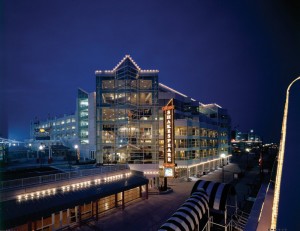 500 Clown, Steep Theatre, the side project and Teatro Luna are founded

Chicago Shakespeare moves into a $24 million theater on Navy Pier

“The Producers” opens at the Cadillac Palace before moving to Broadway and collecting twelve Tony Awards, the most ever for a musical at the time

Richard Christiansen steps down as theater critic at the Chicago Tribune, after 40 years of covering theater in Chicago. Michael Phillips is brought in to replace him, but eventually shifts to film and former Newcity theater editor Chris Jones takes over the role, which he holds to this day.

Mary Zimmerman wins the Tony Award for Best Direction of a Play for “Metamorphoses,” which she’d developed and premiered at Lookingglass.

Hull House Theater, the historic venue Bob Sickinger launched the Off-Loop movement in the early sixties, with many subsequent milestones to follow, closes for good.

Byrne Piven, legendary Chicago actor and director dating back to pre-Second City origins, and co-founder of The Piven Theatre Workshop

Writers’ Theatre opens a second, larger space with 108 seats in the Woman’s Library Club of Glencoe

21 nightclubbers dies in a stampede at E2. The resulting city crackdown on code violations threatens the viabililty of storefront theater in Chicago

Retired Chicago Tribune critic Richard Christiansen publishes “A Theater of Our Own: A History and Memoir of 1,001 Nights in Chicago.”

Hope Abelson, producer and patron of the arts

August Wilson, playwright who had a long relationship with the Goodman

Fred Solari, executive director of the Athenaeum Theatre and co-founder of Dance Chicago

Next Theatre’s production of “Adding Machine: A Musical” is an Off-Broadway hit under the direction of David Cromer

ComedySportz Theatre moves into a new theater at 929 West Belmont

Paul Sills, seminal figure in the development of The Second City and the son of Viola Spolin

“Wicked” closes its record-setting run after playing to 2.9 million people in three-and-a-half years at the Ford Center for the Performing Arts, Oriental Theatre.

David Cromer’s “Our Town,” which he directed for The Hyprocrites, is an Off-Broadway hit, the longest-running production in the play’s history

After spending eight months or so as a gypsy company after leaving its longtime hom on Belmont, Bailiwick Repertory closes its doors and reincarnates a month later as Bailiwick Chicago under new leadership

Lynn Nottage’s “Ruined,” a play commissioned by and premiered at the Goodman, wins Pulitzer Prize for Drama

“A Steady Rain,” by longtime Chicago Dramtists resident playwright Keith Huff and first staged there, opens on Broadway for a limited run that sets weekly box-office records for a new musical, thanks in large part to its cast of Daniel Craig and Hugh Jackman

Eileen Boevers, the founder and longtime leader of the Apple Tree Theatre in Highland Park

Did we miss something? Email [email protected]