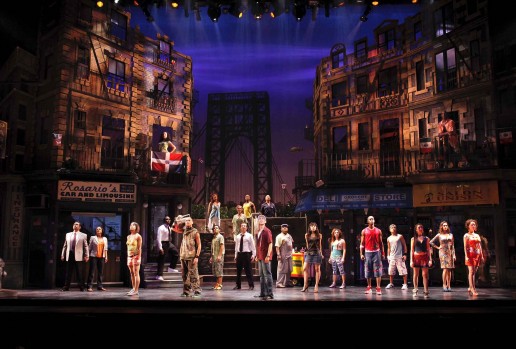 “In the Heights,” which collected four 2008 Tony Awards including Best Musical, soars with the essence of Washington Heights, a neighborhood at the northern tip of Manhattan and out of the orbit of most New Yorkers that seems to be at once both familiar and exotic. Here, the “exotic”—by musical-theater standards—is conveyed via the language, which flows freely in Spanish in many of the songs; the music, a fusion of Latin rhythms and hip-hop; and the dance (again, hip-hop and Latin). But then there’s the familiar—the narrative arc is something of an homage to “Fiddler on the Roof” without the pogrom, and the score resonates with a Broadway fusion of ballads and big numbers, albeit often rapped. An authenticity of emotions, a rare commodity in musical theater, resonates in the immigrant struggles being depicted around this one corner up at 181st Street. In fact, an authenticity resides at the heart of this musical, thanks to its creator, Lin-Manuel Miranda, someone from the barrio himself, and a cast made up exclusively of Latinos and African Americans. As much as I love “West Side Story,” another Broadway classic sometimes brought to mind during “In the Heights,” that show’s a stylized romantic fable about Latino immigrants written by white guys who, ironically, recently hired Miranda to translate some of the songs into Spanish for its Broadway revival. On Broadway, Miranda was not only the creator of “In the Heights,” he also starred as Usnavi, the narrator and central character. Kyle Beltran, who inherits those big shoes for this tour, brings every bit of charisma necessary to the role and his rapping, with a voice that evokes the yearning present in Jay-Z’s singular style, is perfectly suited for a character trying to make peace with romance and the American Dream. (Brian Hieggelke)