by Monica Westin
January 4, 2010Filed under: 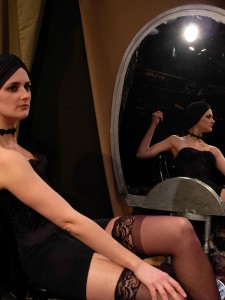 Trap Door stages difficult theater, and it’s sometimes hard to decide whether a particular show’s difficulty provides an opportunity for new ways of understanding, or whether it’s just an obstacle for the audience to find any kind of meaning. Case in point: their American premiere of “Minna,” which might be a deeply important piece of neo-expressionist experimental theater (British playwright Howard Barker, who’s beginning to make a real impact on the fringe theater scene in London, calls his work “Theater of Catastrophe” meant not to be “digestible.”)—or it could just be a frustrating display of histrionics. The play’s focus is on the starkness of power, sex and gender as studied through its title character, whose attempts at seduction and control are thwarted against the backdrop of a war-torn town in Germany. “It’s all the same war,” one characters explains, and the show has no historical anchors—the costumes range from 1950’s secretary outfits to Greek laurel wreaths and powdered wigs and stock Halloween costumes. Instead the focus is on the sexual politics between women, an unraveling Minna and her helpless handmaids, and the men surrounding Minna, who eventually destroy her. There’s no narrative arc per se, and the scenes, which are highly charged at their calmest and hysterical most of the time, are overwhelming as rape after rape, murder after murder are carried out with little sense of their significance. Barker is obviously deeply influenced by Caryl Churchill, and his dialogue is a verbal onslaught of striking turns of phrase, but the lines similarly don’t add up to any real cohesive story and often get lost in rapid delivery or ambient clamor. The actors all give admirable, incredibly energetic individual performances—Geraldine Dulex’s steely Minna and Carl Wisniewski as the major’s weasely servant stand out especially—but despite their energy and physicality, the primary impact of the show is its uncanny, creepy visual field in each scene as the energy doesn’t seem to drive the play anywhere. (Monica Westin)