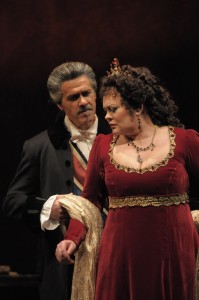 The second time is the charm, as it turns out, with Puccini’s “Tosca.” The Italian warhorse, the most-often performed opera in Lyric Opera history, opened the season last September full of stars thoroughly miscast in Puccini’s melodrama. Happily, this time around, ironically with a “B” cast, things are much better in virtually every respect.

Making her long-overdue Lyric Opera debut, Lithuanian soprano Violeta Urmana is everything you could want in a Tosca: jealous at the drop of a hat with a fiery temper, conniving and manipulative enough to secure passage for herself and her lover and still commit murder, and yet at the same time, she is a tender lover and sensitive artist. I suspect her darker vocal color will not be to everyone’s taste—she was originally a mezzo-soprano but switched to upward roles in recent years—but if viewed as an extension of the character and as a refreshing take on an overdone role, her approach works wonderfully well.

Likewise, Italian tenor Marco Berti, also making his Lyric Opera debut, embodies the fiery yet sensitive spirit of Cavaradossi, who can be concerned about making Tosca jealous one moment by the choice of models in his paintings, and be defiant in the face of torture and execution (this Cavaradossi clearly never buys that this is to be a “mock” execution) the next. How wonderful, too, to have a Scarpia in Italian baritone Lucio Gallo that is so earthy and sensual, not just a monster. This is a lighter Scarpia vocally than we are used to, to be sure, particularly for the climax of Act I, but this Scarpia is less talk, more action. How wonderful the way he uses his charm and sensuality to entrap Tosca in Act II, and for her part, Tosca is tempted by Scarpia in this production, which always makes things so much more interesting.

It is rare to have the leads in this overdone warhorse be compatible in terms of drama and vocal color. In a work where caricature often takes over, everything this time around is understated rather than milking everything. The big arias are often done up to be like operatic moments of “American Idol,” but here, they are refreshingly part of the fabric of the drama, as they well should be. Much of that credit goes to conductor Stephen Lord, also making his Lyric debut, who gave the work an almost chamber music-like feel rather than the overdone, milk-it-to-the-max, treat-Puccini-as-if-he’s-Verdi approach of Lyric’s music director Sir Andrew Davis.  (Dennis Polkow)