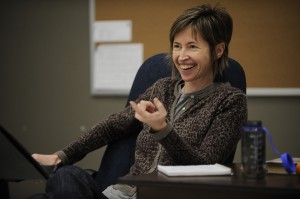 This week Goodman opens its highly anticipated marriage of two one-acts about aging, regret and mourning lost choices:  Eugene O’Neill’s “Hughie” and Samuel Beckett’s “Krapp’s Last Tape.” The lineup of artists involved is formidable: Robert Falls continues his collaboration with Brian Dennehy in “Hughie,” who plays against Joe Grifasi in this play about the ways we deceive ourselves in order to go on. This act about the tragedy of “just going on” culminates in “Krapp’s Last Tape,” Beckett’s masterpiece of a one-man show about an aging performer who confronts his early self through recorded diaries that painfully chronicle a lost love. “Krapp’s Last Tape” relies on the contrast between the youthful hope in the tapes and the decayed abjection of older Krapp—also played by Dennehy and directed by Toronto-based director Jennifer Tarver.

Tarver, who directed Dennehy in the play at the Stratford Shakespeare Festival two years ago, is no Beckett newbie. She garnered acclaim for her curation of five Beckett shorts in 2006, and with a background in music as well as dramaturgy, she’s an easy match for the musicality and rhythm of Beckett’s prose. Newcity talked with Tarver the week before previews about space, composition and the demands of directing Beckett.

This is your second time doing this play with Brian Dennehy. What has it been like taking the show on again in a different space?

In some ways it really is like trying to capture lightning and put it in  a bottle… what’s been interesting about this production is that Beckett originally wrote the play for a proscenium in a tangible, theatrical way—he crafts all the resources of theater, space, light, movement, so space is crucial. At Stratford, we had to work with a three-quarter-round thrust theater, which goes directly against his directions, and so we had to make significant changes to translate the piece. Putting those ideas in the space opened up particularly the first third of the piece. Now we’re back in a proscenium, visiting things we originally changed. I don’t want to reverse the decisions…

Or undo the evolution.

Yes, exactly. I want to move forward but back to the proscenium, so that’s been fascinating. The change in space has forced our hand not to stick with any original decisions. We’re now looking at the vaudville elements of the first third and pulling the resonance in a different way.

Your background is in opera, which seems perfectly fitted for working with this play.

Yes, my original training is in dance and music… I see Beckett as one of the most musically rhythmic, most complex playwrights I know in terms of composition. The challenge for me is to be aware of this aspect in the text and constantly to construct that rhythm.

You must have brought that to the shorts you did of Beckett’s in 2006.

Yes, putting those together was a composition in and of itself, an examination of how plays work. I had a cast of three, and I ended up constructing almost a geometric arrangement… I had three actors, each of which had a solo work and then was in a play with two others. One didn’t speak at all. It was my own stab at speaking back to the structure of Beckett’s work.

How do you see this play working with “Hughie”?

These two shows are similarly of a piece. Stylistically they’re completely different, but both deal with the subject’s loss of illusions, identity and the act of listening features prominently in both plays. The listener in both plays—the night clerk, the elder Krapp—are listening in very different ways, perhaps opposite ways. The tension in both plays seems to lie in this listening. Joe [Grifasi] makes it work in “Hughie.” I’ve never seen an actor be so powerfully silent.

And working with Brian?

“Krapp’s Last Tape” was Brian’s find. Thinking about our relationship, the context is so important—we have been dealing with each other through Beckett and are both equally daunted by Beckett. The work is the most important thing, and we meet through that collaboration, which was incredibly powerful and intimate. Brian has an innate understanding of the physicality of the piece… he might not describe himself as someone who would embrace physical theater—he might describe himself as a naturalistically based actor—but he has a pure channel between intellectual and physical theater that made my job easy.