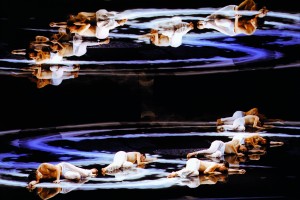 “Everything goes spiral. The spiral is the DNA of Tai Chi.”

I’m talking with Lee Ching-chun, the associate artistic director of Cloud Gate Theatre of Taiwan, about their celebrated piece “Moon Water,” coming to the Harris Theater this weekend. It’s 9pm Taiwan time and the sun is not yet up in Chicago—what better time than daybreak to discuss a dance form derived from the ancient martial art, exercise and meditation form Tai Chi Tao Yin.

Tai Chi training inspired Lin Hwai-min, artistic director of Cloud Gate and the choreographer of the company’s signature work. “He wanted to create a piece based on this energy training, to make it into a dance movement,” Lee says. The movement originated, as with any meditative practice, with the breath. Slowing, deepening and disciplining breath allows the body to attain a state of profound relaxation, freeing energy to move through the body unobstructed. “Everything relaxes,” Lee says, “and moves in a spiral.” She tells me it takes a young dancer three years of training to even begin work on “Moon Water”—and no wonder as Cloud Gate’s dancers are trained in both Eastern and Western physical disciplines: meditation, martial arts, modern dance, ballet and calligraphy.

The extensive training is necessary to execute Lin’s piece, which is as much a meditation as a performance. In “Moon Water,” Lin has created a movement language of unparalleled fluidity and remarkable loveliness. The piece is set to selections from Bach’s cello suites and the interaction between the dancers and Mischa Maisky’s recording is breathtaking—a seamless, harmonious conversation between the physical and the aural. The swells and ebbs of Maisky’s bowing seem to flow through and between the bodies on stage. Even in the short video clips I pulled from YouTube—which reliably lose about sixty percent of the power of live performance—the dancers visibly inhabit the music as fully as they do their own bodies, which channel each movement powerfully from the core. I ask Lee how they decided upon Bach.

“It was challenging to choose a music, one that didn’t sound like modern Chinese. We chose Bach because it expresses the organ and purity of energy,” she says. “And Mr. Lin had been listening to Bach since he was a little boy, so he thought, why not? But also Bach provides an important sense of weight. Chinese movement is weighted, spiral, relaxed.”

Cloud Gate Theatre has performed “Moon Water” around the globe and Lee says the response has been consistent. “I believe a good work is cross-cultural. My experience with ‘Moon Water’ is that the response around the world is very similar. The audience is transported by meditative work. We communicate an instinct…there is no narrative, no role-playing, simple costuming. The audience responses are very much the same.”

“Moon Water”—the title refers to both a Buddhist proverb, “flowers in a mirror and moon on the water are both illusory,” and to the ideal state of the Tai Chi practitioner—takes place on a black stage streaked with curved white brush strokes. Mirrors hang overhead. The company is clad in simple white trousers, the men shirtless, the women in nude-colored camisoles. As the piece progresses, the stage is gradually flooded with water and the mirrors begin to descend, ultimately forming a reflective room; light bounces off glass and water in every direction as the piece reaches its climax. Now over ten years old, “Moon Water” has become Cloud Gate Theatre’s signature piece.

“It is a simple piece,” says Lee. “But because it is simple it requires great skill and concentration. For me, this is our most challenging work because you are performing but at the same time not performing. The piece is now eleven years old and we are happy to be bringing it to the U.S. in its most mature state.”