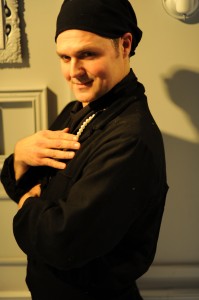 Charlotte von Mahlsdorf was a tough bird. The sixty-something German transvestite survived the Nazis, the East German secret police, a brutal father and everyday, garden-variety homophobia. Doug Wright’s Tony and Pulitzer Prize-winning play traces her efforts to fight prejudices and live her life on her terms even if she has to fudge the truth to do it.

The thirty-character show makes big demands on solo performer Peter Robel;  the piece puts his physical and vocal flexibility through the theatrical wringer. While it might be nice to see more complex levels  of emotional response and physical gesture,  Robel’s technique stays consistent and the approach to his  characters is always respectful.

John Zuiker’s set is a bit  too  sterile for a woman who is captivated by the warm flaws of antiquity, but it makes the most of minimal space. It has many cupboards, perfect for a woman with many things to hide. (Lisa Buscani)