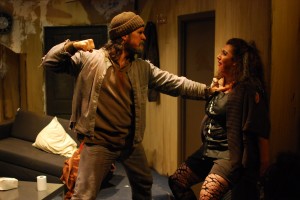 A frustrated painter replaces his aging muse with an Eastern European mail-order bride from a catalogue his washed-up DJ roommate masturbates to. If this show could hit all the notes of dark comedy it attempts, it would be a terrifically acerbic twist on its indulgent trope on the artist and the muse. As it is, “The Artist Needs a Wife” isn’t quite controlled or consistent enough to make it clear how seriously we’re supposed to take the production. Jesse Weaver’s play reels between sincere, moving conversations about aging and regret and hysterical screaming matches and cheesy choreographed fight scenes that make the show occasionally seem like a farce. The problem seems to lie in the writing—is it impossible for playwrights to address art-making without some immoderation?—and not in the acting, which is remarkable. Allison Caine in particular transcends her role as “Whore,” the rejected and vengeful first muse, digging deep for a performance of powerlessness that’s far more mature than the story. (Monica Westin)