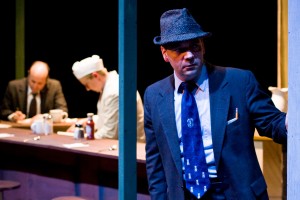 It takes a fair bit of hubris and a whole lot of ambition to make theater derived from an iconic work of art. By taking on not only his most famous work, “Nighthawks,” but a range of his images, WNEP ups the ante with its “The (edward) Hopper Project, ” now in its world premiere at the DCA’s Storefront Theater.

A panoramic, complex set, designed with an authenticity that belies its economy by Heath Hays, takes the “Nighthawks” diner and adds adjacent buildings and rooms, based on other Hopper paintings, to create a sweeping vista of a Brooklyn corner in 1952. Occurring on a single day and night, scenes take place in apartments upstairs, in offices, on the rooftop, on the street, in the bus station and, of course, in the diner. There are eight million stories in the naked city, and WNEP lets us eavesdrop on a handful of them. Fragments, not full narratives, consistent with the mystique evoked by Hopper, create a mosaic of life. Not surprisingly, there’s a noir tone to it all, with spot-on night and the city costuming by Rebecca Langguth and a cinematic jazz soundtrack.

Scenes overlap, though not confusingly, as the play strives to create the sense of real life happening at once, with lighting effectively guiding the audience into place. Some of the nonverbal moments can be missed, or experienced differently based on where you sit in the theater, just as in real life. Comedy, even slapstick, shares space with heartbreak.

The ringmaster directing the whole thing is Don Hall, WNEP’s founding director, who pulls off the three- or four- or five-ring circus with deceptive ease. Though with a small budget and a big cast, it’s perhaps inevitable that the acting is uneven. Several actors nail their parts, visually as well as verbally thanks to casting and costuming—Kevin Gladish is off-puttingly hilarious as a serially suicidal businessman, Patrick Michael Kelly could be Hopper’s model for the diner guy in the whites and Lauren Fisher is a sultry seductress straight from central casting. However, a couple actors stumbled on lines, forgivable due to opening-night jitters, but some scenes are just dead-on-arrival, notably those involving hearts on the break or on the mend. Actors often take the fall for bad lines, and that might be the problem here. Not surprisingly, given the group credit for the show, the writing is spotty, ranging from clever meta-noir tone poems to ineffective melodrama. That the comic bits, especially a strung-out courtship between Andrew Jordan and Amanda Rountree played out almost entirely without dialogue, are the highlights suggests that the fault lies more in the script than the performance.

Nevertheless, with its intriguing set and costumes, its whirlwind of overlapping stories and a cast of seventeen that could rival in size much of the touring fare offered just down the street, WNEP mostly succeeds in making the case that Chicago’s tiniest Off-Loop creators can swing just as big, even with a total budget likely comparable to the daily catering bill for a Broadway In Chicago production. (Brian Hieggelke)