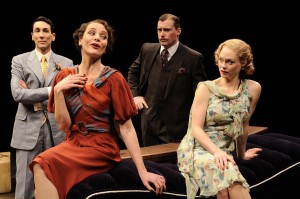 What a brilliant stroke for Chicago Shakespeare Theater to present Noël Coward’s “Private Lives” the same season as it is presenting the Bard’s own “The Taming of the Shrew.” So much is the same and yet so much is different when it comes to the battle of the sexes, but one message remains intact for both: you always love the one you hurt.

This is the first-ever Coward production at CST, a significant development as there is often a Shakespearian snobbery when it comes to Coward that it would be hard to imagine Shakespeare himself accepting. Both, after all, were audience-pleasing pop-culture icons of their time who placed how a story is told—i.e., its language—first and foremost, even over the narrative itself, which is often mundane and predictable in both.  Experiencing Coward in a theater built for the Bard where the play is the thing makes for a remarkably satisfying contrast in playwrights of different centuries who are above all, wordsmiths.

Yes, within minutes of “Private Lives,” we all know exactly what is about to happen, even if we have never seen or read the play before. But the genius of Coward is that even though we know—perhaps even because we do know exactly what will happen—we relish in the expectation all the more, and can sit back and bask in the glories of Coward’s language. The two couples experience what many of us experience in life, falling in love with a person that we can’t live with, but that we can’t live without. But thanks to Coward, these characters say the things that we wish we could be clever enough to say to the person driving us crazy and yet turning us on at the same time, but here, it so satisfyingly happens at precisely the right time, in precisely the perfect vernacular.

The best compliment that can be given to Gary Griffin’s direction and to the quartet he has assembled to take these roles is how much empathy is felt by the audience for every one of them. Borrowing a cue from David Cromer’s “Our Town,” Griffin has the audience configured in a circular manner that has the audience be as much a part of the show as the actors. It is a real hoot to watch real couples sit on the edge of their seats with constant “I told you so” looks and “Aha!” moments back and forth, which adds to the proceedings immensely. We are helped along by the elegant setting, a huge, pale moon suspended above all, plenty of champagne and even Coward sing-alongs (Act II even includes a bit of Cole Porter that perfectly suits the mood), with intimacy that is enhanced by a slight rotation of the circular stage to keep all of the action so close you not only feel it, you can practically touch it.  Even the physical comedy is delivered with superb timing that manages to knock us out almost as devastatingly as it nearly does the characters.

But it is, as a colleague put it, the sheer “wow” factor of the language, above all, that makes the largest impression, and that, thankfully, is allowed to be the real star here rather than have some abstract directorial concept superimposed over the show that would somehow distract us from it.  (Dennis Polkow)