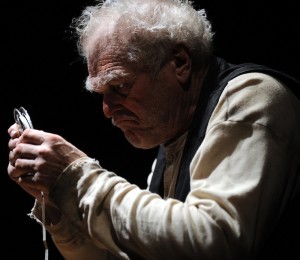 The constant level of high-quality theater to be had on both the Equity and non-Equity levels in Chicago is nothing short of astonishing, to be sure, but every now and then a performance comes along that manages to stand in a class all by itself. Such is the case with the double-bill of two one-act masterpieces by two fascinatingly different yet similarly iconic twentieth-century playwrights of Irish descent, Eugene O’Neill and Samuel Beckett, performed by a single extraordinary Irish-American actor—Brian Dennehy—who came up with the inspired idea of pairing and performing these two works together.

The Dennehy/O’Neill alliance originated under Robert Falls at Goodman nearly a quarter of a century ago and climaxed with last season’s O’Neill Festival which spotlighted the Dennehy/O’Neill/Falls “Desire Under the Elms.” In fact, Dennehy and Falls actually presented “Hughie”—a forty-minute work O’Neill wrote during the period of his greatest genius at the end of his life as part of a planned series of short plays that became a rara avis when he destroyed the other entries—just six years ago, at that time simply allowing it to stand on its own.

That experience proved inadequate enough that Dennehy began experimenting with adding another one-act to be paired with “Hughie” at other venues, initially settling upon a comedic Sean O’Casey opus that Falls came and saw and thought was a mismatch that trivialized O’Neill. It was Dennehy who finally came up with “Krapp’s Last Tape,” a forty-five-minute Samuel Beckett work also from the period of his greatest genius, as a bookend for “Hughie,” and that configuration was presented two summers ago at the Stratford Shakespeare Festival, with Falls directing “Hughie,” Canadian director Jennifer Tarver helming “Krapp’s Last Tape” and Dennehy in both. A huge success, that experience has been enlarged and brought to Chicago, with New York and national tour aspirations.What is fascinating about the pairing is what a perfect complement both works are, given that “Hughie,” at least as Dennehy performs it, is primarily a verbal comedy and “Krapp’s Last Tape,” while it has its moments of surreal slapstick, is a much darker, often silent and contemplative take on essentially the same theme: self-delusion.

Whereas Erie, the lead in “Hughie” who mourns the loss of the night clerk of his rundown hotel basically because that guy validated an image of himself as a big-time gambler, Krapp is slowly but surely coming to terms with a life of his own self-absorption with a Kafkaesque sense of clarity at the end of his journey. Both are disturbing in their own ways, but O’Neill allows us the possibility of opting out by seeing Erie as a buffoonish “someone else” rather than “everyman,” i.e., ourselves. With Beckett, we never get that option: we are confronted in such a direct and personal way with Krapp’s journey of self discovery, there is nowhere else to go. 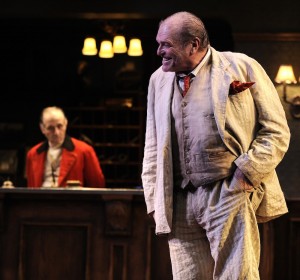 That contrast, at least at Sunday’s press preview, proved too much for some. Whereas the audience was respectful and receptive to the more conventional rhythms of “Hughie,” which opens the evening, and which, it could be argued, does have a somewhat “happy” ending in that the new night clerk who is the indifferent sounding board for Erie gradually becomes won over, as do we, the existential angst of Krapp is another universe of a variation on the same theme.

When Dennehy’s Caligari-like face slowly emerges out of the darkness as the focal point of the stage design and remains static and silent, that shift of rhythm bewildered some, who became restless with audible whispers of “What’s he doing?” “Why isn’t he saying anything?” along with coughs of boredom, candy being unwrapped, attempts to boost up hearing aides and, yes, you could hear cell phones vibrating in pockets. Clearly this is a work that requires a canvas of silence, but that was not achieved Sunday night. It is a wonder that Dennehy didn’t lose character, but he forged ahead as if these distractions were not even there.

You often hear people say that works such as these are “depressing” and a “downer,” and rather than argue that here, which I would, even those who have no interest whatsoever in the subject matter must see these simply to bask in virtuoso acting of the highest order. I have never encountered an actor who could so thoroughly inhabit two completely separate beings so effectively within such a short span of time as Dennehy.

Dennehy’s Erie is a relatively young man, with great posture, high energy, talking up a storm, a regular psychic vampire who goes on and on until you either walk away or simply become subsumed by him, like a black hole pulling in anything around it (the new night clerk has little choice as a captive audience). Krapp, on the other hand, is falling apart almost before his very eyes. Anything he does is an effort, even just getting up. The stooped posture, the untrimmed eyebrows, the minimal movement, et al, reveal a man for whom just the act of living has become a true chore. (Dennis Polkow)