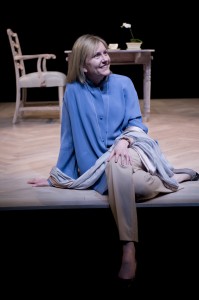 Technically, it’s a dazzling success. Mary Beth Fisher’s performance in the one-woman show is as agile, intellectually driven and illuminating as Joan Didion’s writing in the memoir, from which the play was adapted by Didion herself. And as adaptations go, it’s an astute one, directed gracefully and with some restraint by Charles Newell, who puts Fisher at a minimalist desk that floats against a sea of blackness, which she circles while performing her descent into deep pain and deeper anxiety. But it’s ultimately hard to recommend the show after having read the book, in which Didion, ever the journalist, turns her cool gaze onto her own grief during the year when both her husband and only daughter died in separate tragic and unforseeable ways. The triumph of the memoir is Didion’s clinical, academic, incisive approach to her experience; this play manages to convey a good deal of this philosophy, and does an especially effective job of hitting the notes of dark comedy that could have gotten lost, but it veers too often into confrontation and hysteria—when Fisher shouts “This will happen to you,” it’s hard to imagine Didion shouting this, or losing control, or pacing around in the eventually repetitive blocking, constantly readjusting a scarf as Fisher does throughout the piece. Then again, to make the obvious point that a one-person show must necessarily create some kind of dramatic arc, this might just be a genre problem: a memoir as delicately balanced and meditative as Didion’s just doesn’t hold up to the heavy hand of theater. (Monica Westin)