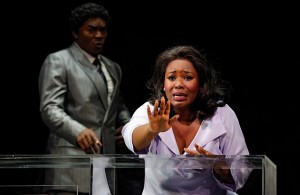 There are several show-stopping moments in this all-new spectacular revival of “Dreamgirls, ” but two particularly stand out: the eye-popping scenario when the cast is dancing in perfect circular formation with digital images of itself from above reflected against its own background Busby Berkeley-style, and the Act I finale where Effie White—played by newcomer Moya Angela—learns that she is being replaced as part of “The Dreams” and soars her way into the take-no-prisoners ballad “And I Am Telling You I Am Not Going” until she practically implodes. Usually audiences are running up the aisles at the end of an act, but on opening night at least, after standing and cheering, folks were still catching their breaths and basking in the afterglow of the remarkable energy even after the house lights came up.

Yes, it helps for audience acceptance—especially in Chicago—that Angela looks remarkably like a young Oprah Winfrey, but to be able to get you to forget the signature stylings of Jennifer Holliday, the original Broadway Effie, and the Academy Award-winning performance by Chicago’s own Jennifer Hudson in the film version, is no small feat. What Angela and the show’s creative team do not let us forget is that aside from the magnetic Motown song-and-dance ambiance and ethos that have always been the glue that holds this show together, “Dreamgirls” was “Jersey Boys” decades before “Jersey Boys.” Like that later show along the same trajectory, it is a backstage mega-group melodrama complemented by plenty of high-octane music, but just as important, it is also as much a backstage musical as well, in the tradition of “Gypsy” and “Funny Girl” where people who are performers in real life can reveal their inner emotional turmoil and hopes via their own art.

No less important is the Broadway meets Motown dance component that the late Michael Bennett oversaw in the original which is given rebirth in the work of director-choreographer Robert Longbottom here who maintains and elaborates upon Bennett’s original vision, lovingly keeping his groundbreaking moment where a down-on-her-luck Effie wows an impatient club owner during and audition so thoroughly that the spotlight shows us her impassioned face to cinematically pull back and reveal her in a full gown in a packed nightclub. And the film version is paid homage by the inclusion of the song “Listen” written for it, here wonderfully rendered by Chicagoan Syesh Mercado as Deena.

It really hit home that every aspect of this production—from gorgeous costumes, to lighting to a stunning visual design making use of multiple digital screens—maintains a single creative vision, a genuine rarity in an art form where collaboration rules the day. “Dreamgirls” is here on a limited run through the end of the week and should be missed at your own peril. (Dennis Polkow)