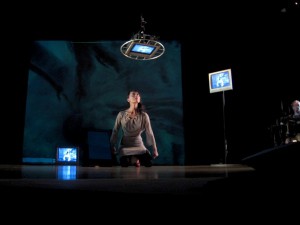 On the stage are multiple video screens. Each screen plays a separate series of very short clips from film, animation, rehearsal footage—any number of two-to-three second images of a human body in motion. Dancers watch and mimic the simultaneous motions depicted on the screens, performing physical tasks by command. This is live processing, a performance approach conceived by actors in the Wooster Group in New York, and adopted by choreographer and Guggenheim Fellow Koosil-ja Hwang as a means to study movement without the burden of narrative or characterization. In an effort to eliminate the political traps of interpretation, Koosil-ja creates a video score of movement material never before seen by the dancers; the demand on the performer is to connect immediately with the images, freeing their mind from judgments about who or what is performing the movement on screen—though many images are pulled from famous films—and replicate what they see. This game of referential Simon Says has an ambitious goal: to create movement free of signification, to transform the dancer’s body into a conduit for pure motion, liberated from conceptions of identity like age, gender, even motivation.“I am interested in movement,” Koosil-ja says of the process. “As an abstract artist, I’m not interested in what the scene is or the character of the dancer is. My score is to just take out the movement and leave the attribution behind. Let’s shoot down gender and politics that are put on the body and really research the movement by practicing going in and out of different bodies.”

Koosil-ja’s latest work, playing this weekend at the Dance Center of Columbia College, seeks to embody the ghost in the shell, giving image to what she refers to as the “invisible body”—the unseen thoughts and emotions that her work does much to level. Almost twenty collaborators have worked to create a 3-D video environment that will ultimately serve as the star of the show. Dancers strapped to modified Wii remotes will live-process video material, the remotes recording their movements, which will then be fed into the 3-D video environment and animated. The body serves as both empty vessel, channeling symbol-less signs, and source for new, yet replicated, virtual material. (Sharon Hoyer)