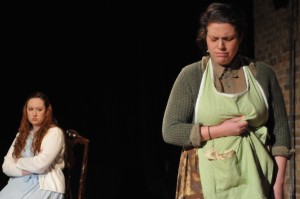 As part of this year’s especially strong Rhinocerous Theater Festival, Tympanic steps up to join the ranks of B.T. Scott, Chris Bower and numerous cutting-edge local theater companies. “And Then It Burst” is by no means the best show on at Rhinofest, but it’s earned its place in the rotation. Composed of four short vignettes by George McConnell running in quick succession, the show surpasses the ten-minute-play festival structure with smart transitions (characters from different plays crop up throughout stage changes, making the piece feel surprisingly coherent as a whole). The individual plays are a mixed bag; at best, they’re beautiful meditations on repetition and power in language and relationships (McConnell constantly plays with words in off-kilter and often very funny ways). The weaker plays fall victim to pseudo-profound banality—for example, a depressed businessman trying to tell another suit about his suicide attempt. What’s provocative and difficult to know is how invested the playwright was in trading in cliche for a particular purpose; each play’s relationship to truisms is different, but they saturate each to varying degrees of success.