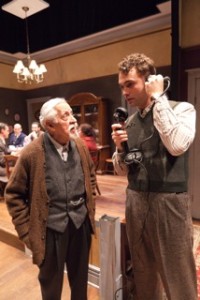 It’s fashionable to treat the works of playwright Clifford Odets as out of fashion. Accordingly, productions are relatively rare for a writer who gave the social unrest coming out of the Great Depression its voice, the writer most associated with the legendary Group Theatre, one of the most influential theatrical ensembles in American history.

But times have changed of late, and the out-of-favor socialist notions espoused in Odets’ work suddenly have renewed relevance. After all, the day that Northlight’s well-crafted revival of his masterpiece, “Awake and Sing!” was to open, I turned on NPR to hear Mad Moneyman Jim Cramer telling the host that our recent economic meltdown proved Karl Marx right. Marx! Hell, Cramer even trotted out Trotsky for praise.

Today’s economic misfortunes are recurring echoes of the economic backdrop of this 1935 play, with one major exception: there was a progressive utopian ideal at work then, the idea that from the carnage a better world, a better economic system would emerge, as expressed to and through the character of Ralphie Berger (played with suitable earnestness by Keith Gallagher). These days, the doctrine of capitalism seems at little risk from either side of the politcal divide, and the great hope is not a better tomorrow but simply a return to a better-working yesterday.

A Jewish working-class Bronx family struggles to make its way in a modest home finely rendered in John Musial’s set: its central dining room a symbol of the confining character of the times that are changing, its living-room area (conveniently visible from all angles of Northlight’s thrust stage) becoming the setting for most of the action, its open-air character also making metaphor for the freedom that the new generation seeks, not only from the customs of their family, but also from the religion of capitalism, of “life printed on dollar bills.”

Though Odets’ language sometimes sounds like spoken propaganda posters, at other times it has a kind of rat-a-tat poetry to it, an arch street vernacular that never was, that not only conjures up the noir movies that followed it (including “Sweet Smell of Success” with JJ Hunsecker given a voice in the lines penned by co-screenwriter Odets) but for me, lived on in the Stan Lee-era Marvel Comics of my youth. These characters talk not like real people, but like we wish real people did.

As in her concurrent staging of “American Buffalo” at Steppenwolf, director Amy Morton avoids revisionism and once again lets the work do its thing, assembling a fine cast and seemingly just letting them bring the tale to life. (It’s no minor accomplishment for a director to appear invisible.) Mike Nussbaum plays Jacob, the Marxist opera-loving retired barber who inspires his grandson Ralphie and irritates his children, as if the role was written for him. And in this fine ensemble, Cindy Gold stands out as Bessie Berger, the domineering mother who anchors the play both comically and dramatically, and Audrey Francis as her nearly equally forceful rebellious daughter Hennie. Loren Lazerine imbues the rich Uncle Morty with just the right mix of family concern and self-righteousness borne of his financial success. You know the type.

Odets’ work is so conjoined with the economic radicalism that had its culmination in America during the Great Depression that it’s easy to forget what “Awake and Sing” really is: a fine ensemble drama about the forces of past and future that tear at the soul of every American family. (Brian Hieggelke)