by Dennis Polkow
February 1, 2010Filed under: 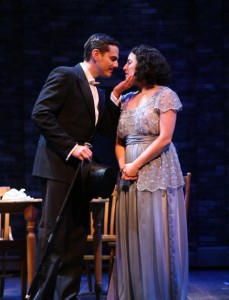 A beloved and iconic 1960s musical that is rarely revived, “Funny Girl” is so associated with canonizing the career of Barbra Streisand and was so tailor-made to her performing style that few attempt to tackle it unless you have one hell of a leading lady who can sing her heart out, make you laugh and break your heart all in the same show.

The great irony, of course, is that vaudevillian Fanny Brice, upon whose career “Funny Girl” is based, was a subtle and smoky contralto, not a belting soprano like Streisand. As an anchor of the Ziegfeld Follies, Brice had made a specialty of comedy along with “victim” torch songs where she came out and poured her heart out about mistreating men, about which she knew so much that a movie was made about her life that so offended her that a successful lawsuit ensued. Her son-in-law and producer Ray Stark sought to set the family record straight with a film version of her life that would be so whitewashed that few took interest, so Stark decided to do a backstage Broadway musical instead.

Unable to secure the rights to Brice’s songs, who was dead by then, a new score was commissioned from Jule Styne, of “Gypsy” fame. As with “Gypsy,” Styne’s score was such a tour de force that Anne Bancroft, the original choice for Brice who was just off of her Tony and Oscar for “The Miracle Worker,” pulled out. Name performers of the day such as Carol Burnett and Edye Gorme were considered but ultimately Streisand, who at that time was still singing at clubs in Greenwich Village, was secured. Though the show was a triumph, it became more about Streisand than Brice, a problem for anyone else trying to do the show ever since.

Drury Lane Oakbrook artistic director William Osetek along with credited help from Gary Griffin—the press release states that the pair co-directed but the program lists Osetek as director but notes that the production was conceived by Griffin—at least are trying to turn the attention back to Brice and break the Streisand mold.  Even the appearance of Sara Sheperd with the dark curls of the early Brice is brought home by a huge poster of Brice that acts as a backdrop. All of this is great, but to hear Sheperd get to those Streisand standards such as “People” and “Don’t Rain on My Parade” in a more restrained style unfortunately leaves you wanting. I kept thinking that she might get to actual Brice songs the way that the movie version of “Funny Girl” was finally able to do, but no such luck: this is the original version of “Funny Girl,” where even the title song had not yet been written.

What Osetek and Griffin do remind us is how little there is to this show sans Barbra, or at least without a substantial performer who takes no prisoners. Brice’s gambling husband Nick Arnstein (Paul Anthony Stewart) comes across almost noble, a far cry from the reality, and Brice, of course, though shown as demanding—and oddly, who is rarely funny in this production—comes across as an ambitious performer who remains concerned for a husband who is simply prideful and down on his luck.  (Dennis Polkow)