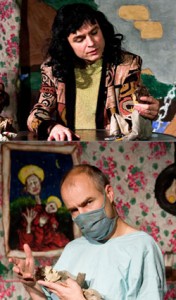 Unfortunately, there was only one performance of Chris Sullivan’s creepy, gorgeous, hilarious, and profoundly one-off show at Rhinofest this year. However, “Mark the Encounter” has been in development for years (it shows), and so it’s possible there will be another incarnation in Chicago, though its creator plans to take it on the road before that happens. If and when it does, it’s an important one to see—rarely do we get a chance to see a performance piece that has been as meticulously worked as Sullivan’s, nor one that incorporates truly arresting—and at times brilliant—writing, perfectly disturbing comedy and a sense of the absurd delivered with droll understatement.

This is all to say that “Mark the Encounter” is very smart and at most times seemingly the work of a deranged consciousness. The show follows a dream logic, beginning with a doctor convincing a woman to donate her newly vegetable husband’s heart to a creepy marionette named Fred. Fred appears again as the fantasy of the dead man’s alleged brother Nosmo, whose insanely funny, and very very sad inner life turns out to be the expressionist hinge around which the short scenes rotate. Nosmo has a Peruvian mountain man living where his heart used to be (dysphemistically called a homunculus). His fantastically depraved and hilarious fantasies of seducing his brother’s widow run up against deeply unhealthy psychotherapy sessions that easily outstrip the subject’s usual treatment. Other scenes, intertwined and undermining one another, including an undertaker with the hustle of a used-car salesman and a series of horrific funeral elegies delivered with professional deadpan, somehow do more than stay afloat. This show embodies the niche between performance art and theater that Chicago desperately needs filled, and it does so in a damn smart, damn funny way. (Monica Westin)