by Brian Hieggelke
February 2, 2010Filed under: 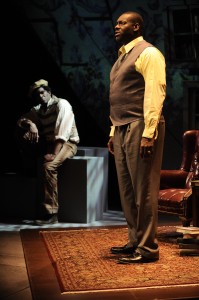 Playwright Tanya Barfield’s Pulitzer-nominated “Blue Door” is ambitious in the range of topics and emotions it throws into its stew, from terror to humor, from classic questions of black identity—if you play the white man’s game, are you black enough?—to more contemporary versions surfacing in the age of Obama, such as, is it time to stop fixating on racial identity issues once and for all? But some stews, no matter how delicious their individual ingredients, end up tasting rather blah. And that’s the problem here: plenty of choice wordplay, funny bits and heartbreaking stories that, when mixed together, fall apart.

Lewis finds himself alone, his life something of a mess. He involuntarily “seeks” answers in his ancestors, who come to him in a series of sleepless waking dreams one night. How does this great grandson of slaves, now a member of the intellectual elite as a college mathematics professor, end up so unhappy, in search of “the why” of his life?

It’s the question that keeps religion in business, and to Barfield’s credit,  she doesn’t take that easy way out. That she doesn’t offer any way out isn’t inherently a problem; life’s not that simple. But she raises issues that not only go unresolved, they don’t seem to be adequately addressed. Lewis skips the Million Man March because he doesn’t feel compelled to go. For that he loses his (white) wife and is given a lesson in ancestral suffering. Barfield seems to have contempt for the life Lewis has chosen, one of assimilation and mainstream achievement, even though it is one his suffering ancestors had died for. If Lewis just gets in touch with his roots, if he asserts his black identity, she seems to be suggesting, all will be well, but she doesn’t make a convincing argument why this is so.

Perhaps this is due to the relatively short shrift given to what should be the most important link in Lewis’ family chain, his father. The horrors of the African-American ancestral experience may be familiar in general, but their specifics never lose their heartbreaking character. As such, we see great-grandfather Simon’s journey from slavery to freedom in vivid detail, but Charles, the father, is mostly unsatisfactorily sketched, as is Lewis’ drug-overdosed brother, Rex.

Keith Pitts’ set works effectively, given the rather limited stagecraft the playwright has offered in this very talky work. And both actors in this two-hander, Bruce A. Young as Lewis and Lindsay Smiling as everyone else, do a fine job of breathing as much life as possible into the material.

Although not an unpleasant evening, this play’s rhetorical methods are, above all else, problematic. An insomniac’s delusions make for a cheap and easy device with which to construct a narrative, one that is ultimately unsatisfying. (Brian Hieggelke)