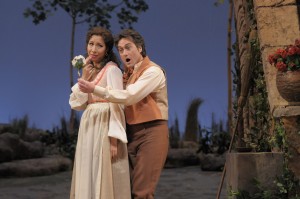 Who would have thought that this silly opera buffa of the bel canto era would end up being one of the highlights of the current Lyric Opera season?  Donizetti’s “The Elixir of Love” is one of those works that endures primarily because of its rapturous melodies. Its far-fetched “plot, ” such as it is—an illiterate country boy in love with a wealthy land owner who competes for her affections with a lout of a military officer by buying a barker’s magic love elixir—is hardly compelling. One opera lover was overheard complaining that in contrast to the current Lyric “Tosca,” where every main character ends up dead, how boring it is that everyone in “Elixir” actually lives. Oh well.

Death tolls aside, there are aspects of this production that make it a “must see.” The quality of the singing itself is extraordinary and, overall, this is the finest “Elixir” to be heard here in many, many years. Lyric has routinely used “Elixir” to spotlight a particular singer—this was the second opera Pavarotti ever sang here—but the supporting cast has usually been immensely uneven, making this a long evening when you hear singers with stodgy voices attempt to traverse the many runs, scales and trills of the piece. Here, however, we actually have a cast who not only can actually sing this stuff, but that is credible dramatically in doing so.

Italian tenor Giuseppe Filianoti, making his Lyric Opera debut, is a stunning Nemorino, not only able to sing up a storm with a beautiful vocal instrument that is the real deal, but has the dramatic skills and leading-man qualities to immediately win the audience over to his side. His Act II “Una furtiva lagrima” was so moving that it literally stopped the show and despite cracking a small smile while holding still, supposedly heartbroken, he managed to stay in character.

Soprano Nicole Cabell, a Ryan Center alumna who went on to win the Cardiff Prize, is a Lyric Opera favorite who has often been cast in roles too heavy for her voice here. Not this time: her Adina is the best thing she has yet done at Lyric and the role is a perfect showcase for the best qualities of her voice. The dramatic ease with which Cabell goes from a playful suitor to heartbroken lover makes us actually care what happens to these lovers.

Even the usually buffoonish roles of Belcore, here sung by Italian baritone Gabriele Viviani in an impressive debut, and Dulcamara—sung by veteran Italian baritone Alessandro Corbelli—go far beyond the usual caricature seen and heard in these roles. Corbelli also has the additional layer of reality of having a live horse onstage to lead his elixir wagon, but even the horse is well behaved. Italian conductor Bruno Campanella manages to keep things light and buoyant and has an uncanny ability to shape the piece’s vocal phrases to perfection. (Dennis Polkow)