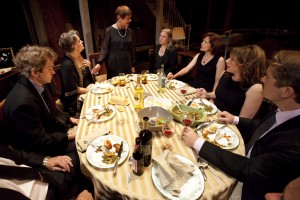 In the climax of the Steppenwolf revival of David Mamet’s “American Buffalo, ” a polyester-clad, red-faced Tracy Letts tears up the stage, literally, by trashing the contents of a Chicago antique store circa 1975 so violently that audience members actually duck. But Letts’ current work as an actor, however intense and convincing, is nothing compared to the way that he is currently tearing up stages around town as a playwright.

Where else but in Chicago can you see the work of a Pulitzer Prize-winning playwright in no less than three fascinatingly different guises during the same week of a dreary February?  There’s the Mamet Steppenwolf revival where you can experience Letts “in the flesh,” as it were, in the work of another playwright who has profoundly influenced him; an explosive performance of Letts’ first play “Killer Joe” in a no-holds barred production at the intimate Profiles Theatre; and the national touring production of Letts’ epic masterpiece, “August: Osage County,” the work that has brought him such unprecedented and award-winning attention and acclaim.

For those of us who missed the original Steppenwolf premiere back during the summer of 2007—which is when the play is set—or in its later incarnations on Broadway and on London’s West End and who therefore may wonder what all of the fuss was about and whether or not a play could possibly live up to all of the hype, the answer is a resounding “yes.”

One reason is the epic structure of the work itself; at three-and-a-half hours with a prologue and three full acts in an era where most new plays—including Letts’ own—are usually dispensed with in a single act or two and come in at less than half this length, this is a full evening’s experience that despite its duration, actually seems to fly by. “August” is a full meal in an appetizer age.

But the real fascination with this play is that its subject, the dysfunctional family run amok, is something that all of us can relate to, whatever the particulars of our own family situation may be or have been.

Some of us are luckier than others, to be sure.  My companion for the evening who came with no presuppositions and knowing little about the play itself except for the attention it had garnered, remarked when the lights came up after Act I that it was unclear as to why people would pay for this stuff when you could just as easily get it at back home for free. No doubt sad, but true, for some of us, but while most of us experience some of the tensions and dynamics of specific characters in “August,” few of us have been careless enough—or sadistic enough—to allow things to get anywhere near the boiling point of the Weston family. And even if we did, few of us would manage to be so precisely on target as the Westons, all of whom are sharp-shooters.

As such, there is a certain satisfaction in experiencing the inevitable consequences of another family going through these disparaging motions and daring to say things that all of us have thought—but few of us would ever actually voice—with extraordinary eloquence and cutting-edge humor. It is a remarkable “What if?” scenario that we continue to watch like a train wreck in slow motion because we all somehow instinctively know, as Robert Penn Warren so eloquently put it in “All the King’s Men” and which Letts chose to place as a written prologue to the text of “August,” that “…the good old family reunion, with picnic dinner under the maples, is very much like diving into the octopus tank at the aquarium.” Most of us avoid the tentacles; the Westons however, go for the throat, every time.

I kick myself for managing to miss the original cast of “August” at Steppenwolf two-and-a-half years ago, but take great solace in the fact that original director Anna D. Shapiro’s conception and careful stewardship remains so carefully intact with this touring production, no small feat given the cavernous size of the Cadillac Palace venue. The voyeuresque sense works wonderfully well, and while I have no doubt that the original cast was amazing knowing other work of most of them, there are no disappointing performances here and particularly, the now 82-year old Academy Award winning actress Estelle Parsons as Weston family matriarch Violet is a tour de force that allows her to eat up the scenery—and her daughters alive—with immense aplomb.  (Dennis Polkow)